Well I had good intentions, but this is woefully out of date. I will try to catch it up soon!

I have not been keeping my maintenance of “The Bugeye” in my website/blog, but I will begin today!

Returning home from the Shenandoah Valley British Car Club show in Waynesboro, VA I noticed that the clutch pedal was slippery. Sure enough the seals in the master cylinder failed and I had some nasty brake fluid leaking from the cylinder. I removed both the brake and clutch masters figuring that I might as well rebuild them both at the same time. Both were brand new when installed in the car, so other than cleaning the bores I did not bother with a full rebuild including honing or lining the bores. I have fewer than 12,000 miles on the originals, but it has been five or six years and who know how long they were on the shelf before I installed them?

Both of my masters were 5/8″ bores and I decided to purchase a new 3/4″ bore for the brake system. Ordered one from British Parts Northwest.

In preparing to bench bleed the two masters I decided to purchase a little “HELP” kit from Summit Racing for all of $6.00. I did substitute clear hose for the black vinyl so that I could observe the air bubbles flowing to the fluid reservoir. The Healey master cylinders use the 3/8″ –  24 and the 7/16″ – 20 fittings, but many others are supplied in the kit. 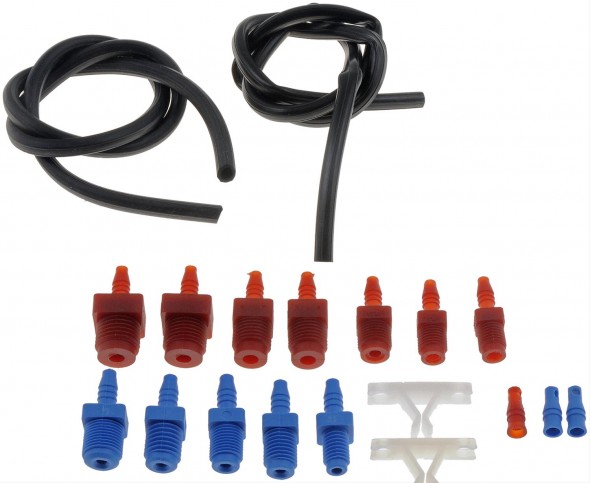 Steve Gerow on the British Car Forum recommended “pulling” the air from the brake calipers rather than pushing the fluid from the reservoir:

“This bleeding syringe worked a charm, obviating the need for bench-bleeding. My Healey-neighbor Dennis Williams suggested packing the area around the nipple with grease to prevent air leakage. You just pull the air out of the system until you’ve got clear, bubble-free juice in the syringe. Keep an eye on the reservoir, of course.” 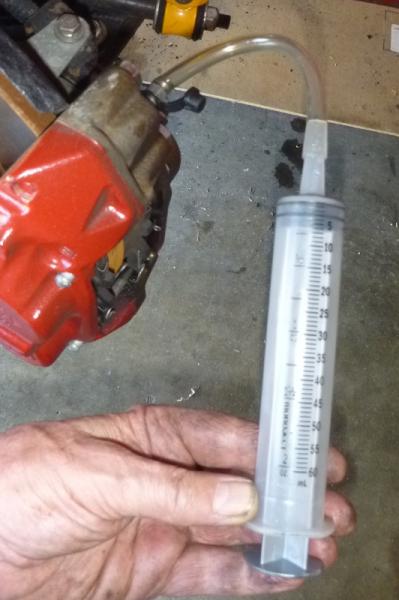 Steve often comes up with the innovative ways of approaching maintenance issues so I thought I would give it a try. These are the directions that came with the syringe:

I was overdue for a complete brake fluid flush so I pumped out all of the old stuff while I was at it.

I have had a Motive Power Bleeder http://www.motiveproducts.com for several years and never used it. I ordered the special reservoir cap specified for the Healey – Part number 1100 I believe. It did not fit!

This master cylinder episode got my inspired to solve this little problem. I ordered another master cylinder reservoir cap and seal from Moss Motors. Part numbers 596-210 and 582-500. I then went on a search for a 1/4 brass fitting to install in the cap. The fitting was easy to find but after trying two automotive parts stores, a “they have it all” hardware store and a large plumbing supplier I gave up on finding a nut with the proper pipe thread! Finally, at a local fabrication shop I found these Russell fittings and they worked perfectly. The hose and cap #1100 to the right in the image below were supplied with the Motive Bleeder. I just disconnected the hose from the cap that did not fit. 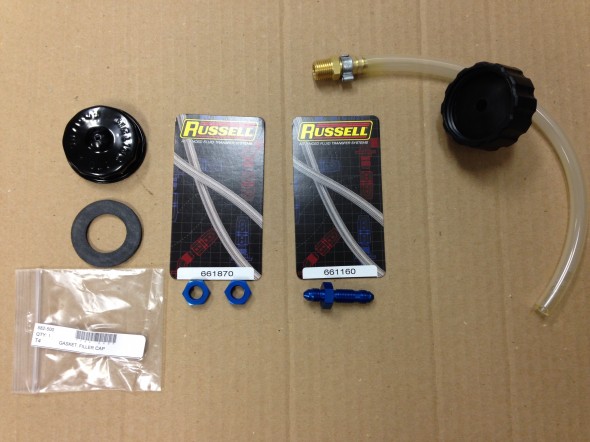 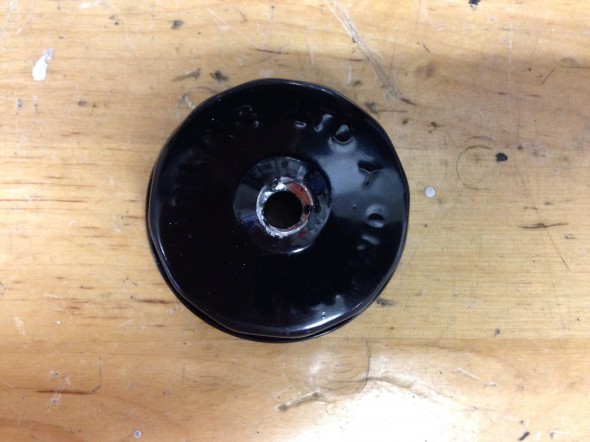 The Russell fitting was then pushed/screwed through the cap and the nut was tightened on the reverse side. 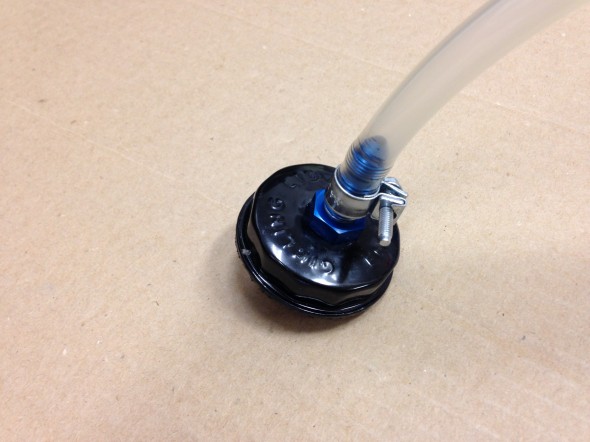 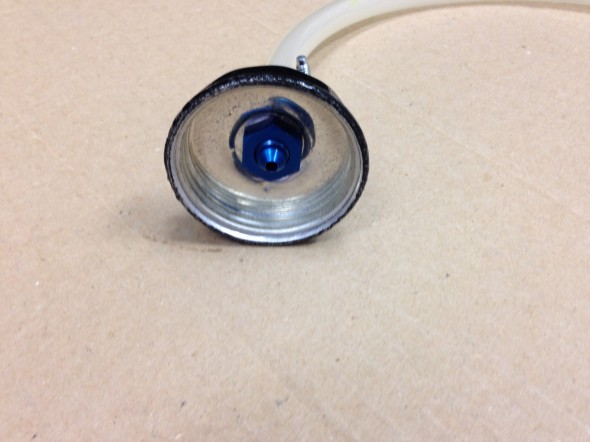 To help ensure the fitting would be air tight, I then smeared a fairly heavy coating of Clear RTV Silicone around the fitting and nut in the reservoir cap. Finally the rubber seal provided by Moss Motors was inserted into the inside of the cap.

The new custom hose extension can then be attached to the pump hose and we are then ready to use the Motive Bleeder on a Big Healey. 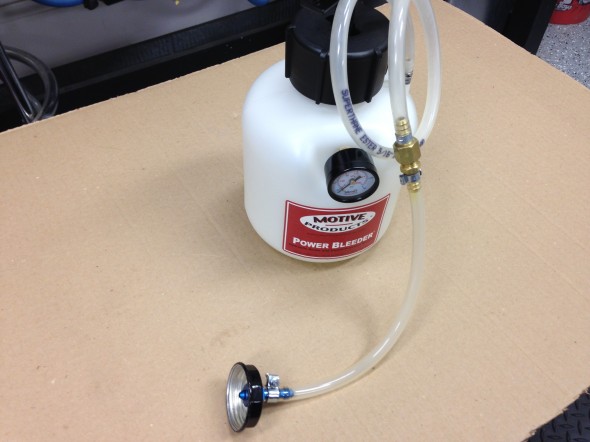 Conclave 2014 is to be held at the Homestead Resort, only two hours away from home. Judith and I will attend an plan to drive The Bloody Beast to the event. The car is generally in good condition, only needing a few things tended to before driving to Hot Springs, VA for the event.

I was doing a little engine bay wipe down after having the Bloody Beast on a little road rally in Northern Virginia when I noticed that the surface of the light relay box mounted on the left front inner wing had deteriorated in appearance. I should have put a clear coat on the zinc when the cover was new, but did not think about it at the time. Any way, I removed the cover, sanded and polished it the best I could and then clear coated it before re-installation. Back to looking good once again. 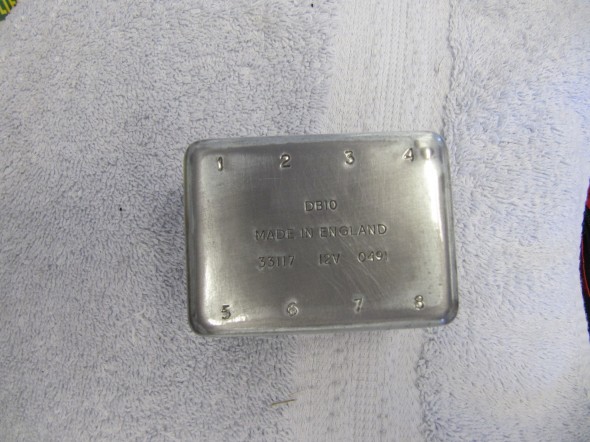 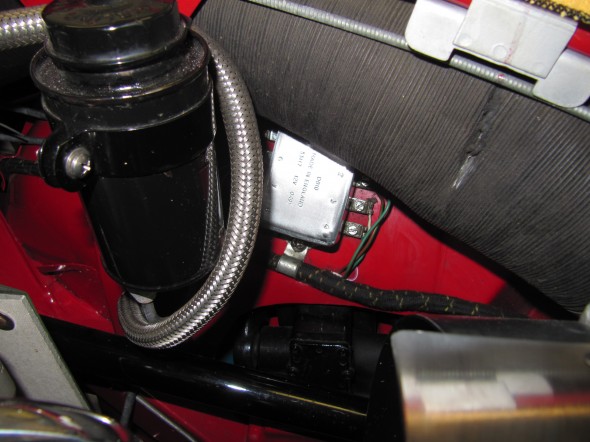 I had some problems with loosening hub nuts on the rear hubs and upon closer examination discovered that the proper Healey hub nuts do not fit the hub stud opening as they should. My conclusion is that the reproduced Healey hubs mimic the angle of more contemporary hub nuts. Dorman  #611-014 hub nuts fit much better than the original nuts.