The heart of the original Jaguar MK2 electrical system was a fuse panel assembly located on the LH engine bay valance under the bonnet. The fuse panel bracket assembly houses the RB310 Voltage Control Box (Regulator), the Fuse Box unit, and the Horn Relay. It has a metal top protecting the internal components which is secured by a knurled chrome thumb screw or knob. My panel was pretty rusty but cleaned up nicely with media blasting and was then powder coated black.

Today it is hard to imagine that the fusing of the entire electrical system of the car was handled by two fuses! 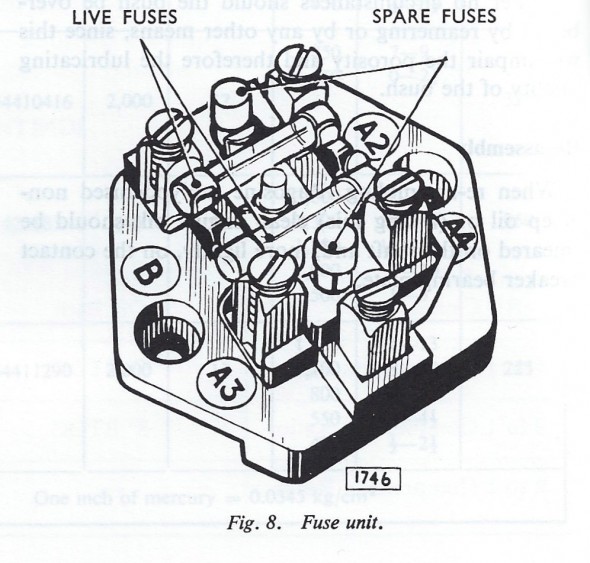 I am upgrading the electrical system and will be using an alternator with an internal regulator to replace the dynamo or generator. This action will eliminate the need for the voltage control box. I will use a modern Bosch automotive relay for the horns which will eliminate the need for the original Lucas horn relay. Finally, I am upgrading from the original Model SF6 fuse unit with the two glass fuses of 35 amps and 50 amps to a modern fuse/relay panel supplied by Marc Goldblatt, owner of Classic Technologies. http://www.classic-technologies.com I will be able to utilize the base of the original fuse panel bracket assembly with Marc’s fuse/relay panel and will therefore keep the fuse connections at the same location as original to the car. Marc’s panel can be mounted horizontally or vertically and I will not make a final decision on the orientation until I have the engine in place for trial fitting.

This is a link to a short video that Marc Goldblatt made about his product. 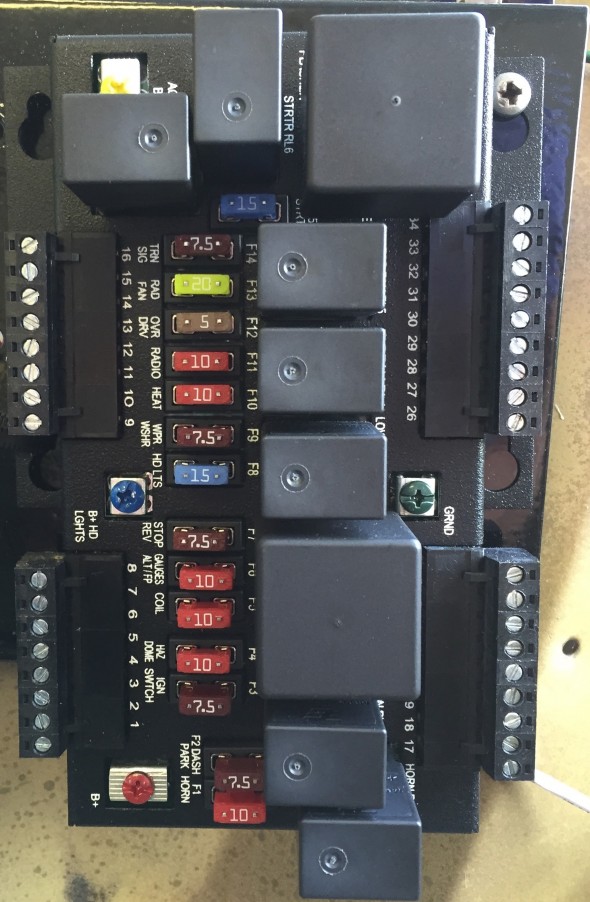 The new harness is simplified and made up of discrete runs from the fuse box to the switch or accessory. The enclosure for the fuse box is 16 gauge steel with a powder coated finish that is silk screened for easy identification of the fuses, relays and terminations.  The Classic Technologies panel is only 6 3/4″ (171mm) long X 4 5/8″ (81mm) wide X 2 3/16″ (56mm) tall. The lug-less terminations into unpluggable connectors are another nice feature making the installation of the panel easy and convenient.

A poster size color schematic was provided along with a clear instruction manual to guide hobbyists like myself through the installation. Marc will provide additional support if needed.

This is the original assembly: 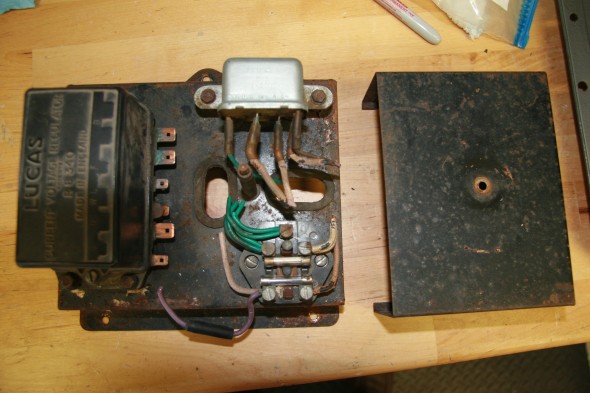 Although the Classic Technologies Box is more often seen mounted under the bonnet somewhere, I have elected to mount it under the dash on the RH side of the interior. This will require some modification of the fiberboard panel under the dash but that should be accomplished with little problem. My installation looks like this: 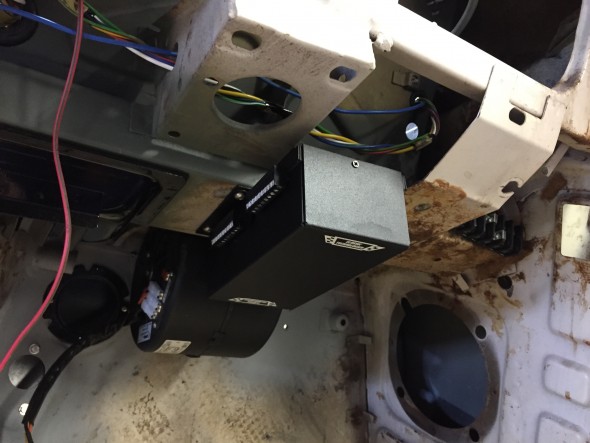 I will still use the base of the original fuse panel bracket assembly in its original location on the LH valance in the engine bay.  Three Barrier terminal blocks used to make connections for lights, horns and etc., will be mounted on the LH valance and the base of the fuse bracket will be used to cover and protect the terminal blocks and wiring. On the top of the base I will be mounting fuses and connectors associated with the alternator, and power steering. I will then fabricate a new cover for the base that will shield the entire base not just 2/3 of it as was done originally. This is the powder coated mounting bracket assembly: 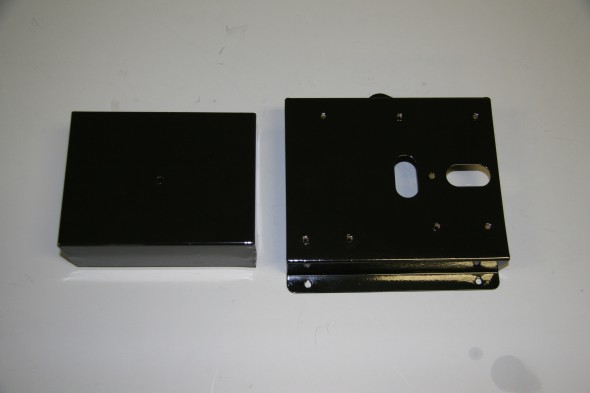 The 15 fuses are broken up into three groups:

1. Constant Power: Fuses F1 through F4, F8, and F15. These fuses are tied to the battery + terminal (B+). Examples: Dome Lights, Parking Lights, Hazard Flashers, and Horn. These features have power regardless of ignition switch position.

2. Ignition Power: Fuses F5, F6, and F7. These are items that are critical to starting the car that should have power while the car is being started. Examples: Coil, Alternator excitation, Fuel Pump, Gauges/Warning Lights, brake lights.

3. Accessory Power: Fuses F 9 through F14. These are items that are not critical to starting the car and should not have power while starting the car to maximize power to the starter. Additionally, in order to prevent battery drain, these items should not have power when the keys are removed from the ignition. Examples: wipers, heater motor, turn signals, overdrive, radiator fan, radio, reverse lights…

In addition to the gauges, switches, and components typical of the MK2 that the Classic Technologies Fuse/Relay Panel would manage, the modifications to my car will necessitate individualizing the wiring schematic that Marc provides with his panel kit.

I will need to add circuitry for the following features:

My car was not air conditioned originally. I am installing an after-market kit produced and sold by Rock Browning of RetroAir, Inc. As I see it, the kit has the following electrical components that will need to be incorporated into the new wiring diagram.

My car did not have power steering originally although it was an option at the time. I have installed rack and pinion from a later Jaguar that uses an electric power steering pump. The vendor, M&C Wilkinson reported “The power steering pump uses approximately 40 amps at maximum draw which is slow speed/full lock.”The vendor also supplied an 80 amp fuse and a connector block.

I am using a more recent Jaguar wiper motor and a modified wiper switch all purchased from Classic Motor Cars in England. I understand the amperage requirement to be 6 amps.

I am using seats from a later Jaguar (1990 Daimler XJ40). Although the seats have heaters, memory and a few other gadgets such as a seat belt alarm, I intend to only use the seat motion adjustments (four switches for each seat that will be mounted on the central console), and the lamps on the rear of the front seat headrests. The back of the seats have folding “picnic” tables.
Looks like the seats require 5 amps (7.5 max) each. Each seat needs a relay.

Specifications for the amplifier have yet to be determined, but I anticipate perhaps a 300 watt amplifier requiring approximately 25 amps.

I plan to stick with British Wiring Codes wherever possible in the rewiring of the MK2.

Mike McPhail, the president of the South Texas Austin-Healey Club, published an article in the July, 2010 issue of Regional Rumblings, the Club’s newsletter that provided an excellent color coded summary of Lucas wiring that will surely prove helpful with the Jaguar as well.