In 1977, I was 25 years old and living in Harrisonburg, VA. I had purchased my 1960 BT7 in 1971 while in college. I was a subscriber to Healey Highlights, the “Official Publication of the Austin-Healey Club, Pacific Centre, San Jose, CA.” Through the publication, I learned that the Club’s East Coast meet would be held in little New Market, VA at the Shenvalee Lodge and Golf Resort nestled next to the Blue Ridge Mountains in the Shenandoah Valley. The Club had an East Coast event and a West Coast event each year back then. Today we have Conclave and Rendezvous.

I was eager to see some great examples of the Marque, and I understood that the man himself, Donald M. Healey, was going to be there. I needed no more reasons to attend. I don’t recall why, but I did not participate in the entire event and I do not know how long the event ran. I do know that it was held over the last weekend in August and that is was plenty hot!

I was able to meet Donald Healey. He graciously autographed my BT7 Virginia DMV Title, my Driver’s Handbook, and my copy of “The Works Cars…Comin’ Home.” This was a special commemorative publication that was distributed to those with subscriptions just before the annual meets. 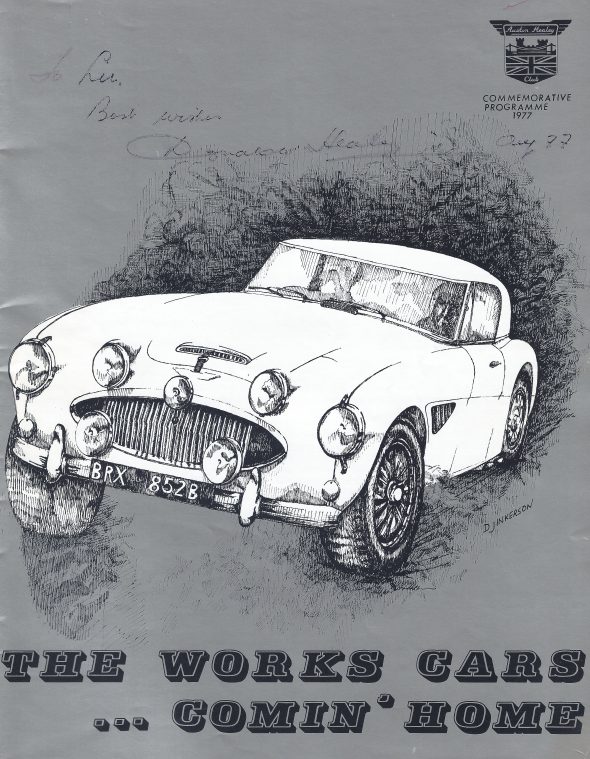 The Christmas (not December?) issue of the Healey Highlights had an account of the annual events. 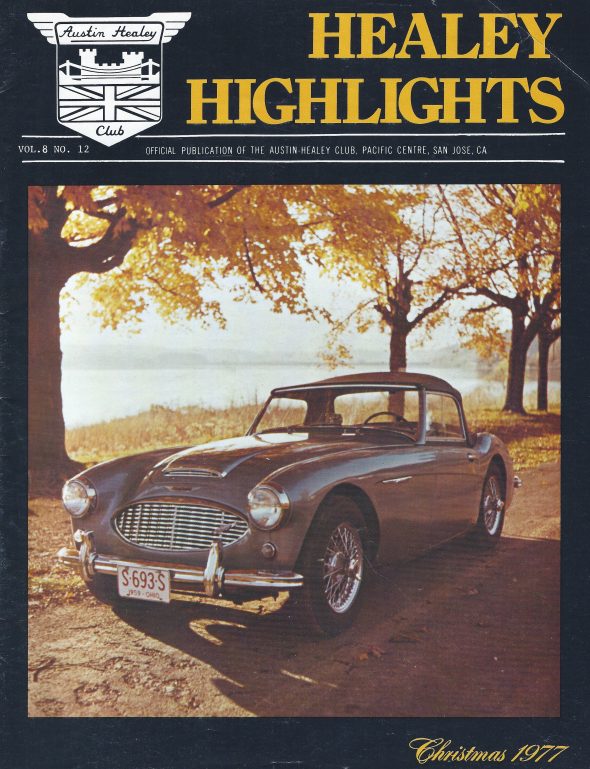 The following is a reprint of the article about the East Coast Event: 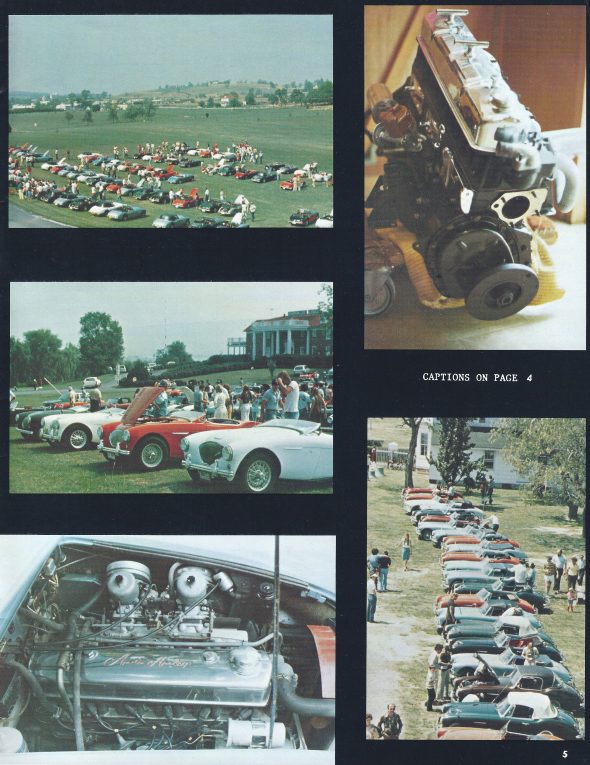 On the last weekend in August 1977 approximately 120 Healeys gathered in New Market, Virginia located in the Shenandoah Valley between the Blue Ridge and the Appalachian mountains for what we feel was the best Austin-Healey Club Pacific Center East Coast Meet.

In order for the cars to arrive in the excellent shape they were in, we are sure there must have been a tremendous amount of work done in the weeks before. We can properly attest to three such cases. Of course, most of the major work was done before the final hectic week, but the last minute detailing required many late night hours.

The unfortunate first car of our trio, owned by Bill, was un­dergoing painting and reassembly following a complete restor­ation, but due to the untimely crushing of the new rear fenders by a truck driver, the restoration was suddenly halted and emphasis was directed to the preparations of the remaining two cars.

In the case of Jim Hayes’ 1959 100-6, the paint was scarcely dry 6 days before the Meet, much less having any interior or carpeting in place. All of the detailing, interior and new floor boards required about 100 hours to prepare. Jim Clark’s brown 1962 tri-carb was in fairly good order at the outset and just required a mechanical inspection and polishing of the chrome wires. Good order, that is, until 10 hours before the scheduled departure when the fuel pump decided to leak on the garage floor. Fear not though as the team of Hayes, Clark and Clark had the situation in hand shortly.

By Friday morning with the cars packed and fingers crossed, the switches were on and the starter buttons pressed. We were off and running, the work paying off as the Healeys roared to life and performed flawlessly for the next 300 miles.

Shortly after reaching New Market and unpacking, much to our pleasant surprise we were in the position to greet Donald Healey as he was arriving at the motel. After a brief wel­come and chat, we adjourned to the bar to wet our whistle and indulge in conversation with “the man.” Shortly thereafter we left for registration and the beer party at the Quality Inn. While the registration was in process, Donald was in the spotlight with everyone and quite enthusiastic about the party and the questions. Following the end of this first social gathering, Donald requested a change of location due to the lack of good dancing music on which he seems to thrive.

At this point, Jim Clark invited Mr. Healey to ride with him back to the Shenvalee Lodge. Jim said to Mr. Healey, I hope you don’t mind, but the hood is off my car, to which Donald responded, ”What, with the motor showing?” This brought in­stant laughter to all around who have often been confused by this point. What a nice memory though to have Donald Healey ride in your car, eh?

Once we arrived at the Shenvalee Lodge, we headed for the pub and ordered a round of drinks. We soon found the music to Donald’s liking and he proceeded to dance the life out of all the ladies present, including the barmaid! After another round or two and endless conversation it was nearly 2 A.M. Since Donald had every intention of making his 7 A.M. swim, we all decided to retire for the evening.

The next morning bright and early, we understand Donald did make it to the pool to do what he likes only second best to dancing. Later in the morning after breakfast the cars began to line up on the grass in front of the Shenvalee Lodge for spectator judging. By noon about 100 of the 120 cars present were in place. It was a beautiful sight to see the cars lined up according to series classification. This procedure gave the people a first-hand opportunity to view the models from the BN–1 to the BJ-8. At this point the Meet resembled a beehive as Healey enthusiasts swapped information, parts, stories, and friendship.

Soon Donald arrived, after a quick refreshing dip in the pool to minimize the 90+ heat, to inspect the cars. It was during this time that we learned of Donald’s great love for the “Frogeye”  as he personally inspected and posed next to Bill Gladen’s immaculate Sprite from North Carolina.

Late in the afternoon, after the car display and picnic lunch awards were presented by Mr. Healey for the best cars in class as well as miscellaneous hard luck awards (see listing elsewhere – ed.). With that over, it was time for a small caravan of Healeys to drive over to the famous Luray Caverns deep in the Blue Ridge Mountains. That view of Healeys ex­tending into the distance winding their way up the mountain­ side and that unmistakable sound was an enthusiast’s dream come true.

Our return to the Quality Inn, our other headquarters for the weekend, found us gathered around the now familiar keg for more conversation with Donald and friends. The beer party was a great get-together idea and everyone who attended seemed to have a good time.

That night we concluded an already perfect day by sharing a table with Donald Healey and his close friend, Fred Horner, who had just recently retired from British Leyland. The con­versation naturally included cars, mostly of Healey origin, but Fred Horner also informed us of “the shape of things to come”. With late evening already well behind us and a sleepy-eyed Carolyn Thompson – our amazing hostess for the weekend – the party appeared to be winding down. Windinq down until the arrival of Gary Hemphill and the group from Hemp­hill’s Healey Haven which sparked new life into the party. With the prospects of more dancing partners (and maybe just one more Scotch), Donald shifted into overdrive and the en­tire party came to life again. Finally, Donald suggested that with sunrise soon to arrive we all retire as he sensed that the “young folks” could handle no more excitement.

As we stumbled back to our room, we looked upon the brown Healey exposed by the still-bright moon and could not resist the temptation of a quick drive back across the mountain. Jim Clark drove his Healey at an undisclosed rate over the mountain and into the long flats awaiting us on the other side. On the return trip I (Bill) drove Jim’s car pressing it to its limits (almost beyond, on one curve, or maybe it was my limit). We both agreed the car had never performed better perhaps it knew its creator was near!

The following morning we reluctantly said our good-byes to new and old friends and final picture requests with Donald. The weekend was a fantastic success due to the presence of Donald Healey and the people themselves. Of course, a tre­mendous amount of credit is due to Carolyn Thompson, too, for her many hours of effort before the Meet to help bring that success about. To Mr. Healey, we extend you our thanks for all the memories, and we hope that you can return to share new ones with us next year.

This photo of DMH is one of my favorites, taken at one of the national meets probably in 1976: 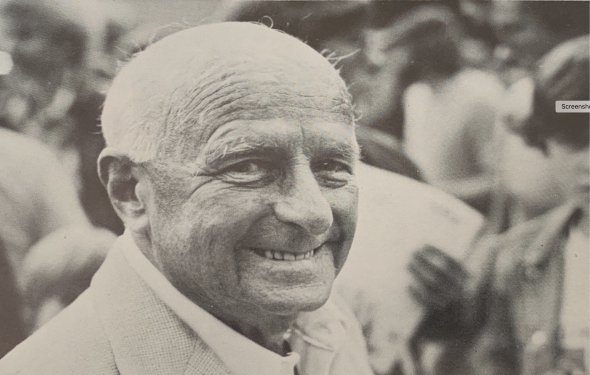