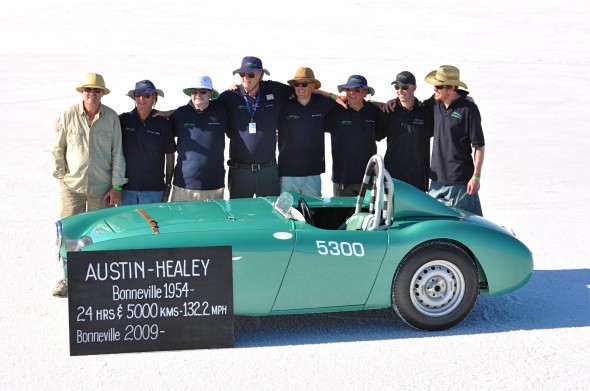 A team led by Bruno Verstraete, from Switzerland, and Steve Pike, from Australia, recreated the 1954 Healey Endurance Car and the Streamliner and returned to the Utah Salt Falts 55 years after Donald Healey set numerous speed records in the original cars. One hundred and fifty to two hundred Healey faithful came together in mid-september in Wendover, Utah to observe the running of the cars and to share their enthusiasm for the marque. I had to fly out from Virginia to see history being recreated, if not made!

The owners never intended to break DMH’s records, wanting only to get close. Weather was a bit of a problem delaying the runs by a day. The Endurance Car ran a respectable speed of 127 mph and the Streamliner, while plagued with supercharger and parachute problems, managed 149 mph. 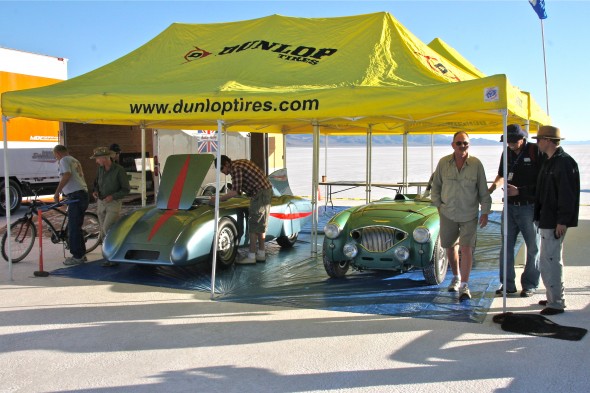 The Healey Team on the Salt Flats

The following link will direct you to a gallery of images memorializing this very special event:

Primarily because of the hard work of Jeff Johnk, the 1990 Healey Challenge between the Brits and the U.S. was revisited in 2005 with the Aussies versus the U.S. Healey Drivers. It is an understatement to say the the Australians cleaned our clocks, but it was all in good fun, and a special treat to all who saw the cars around the country. I had the chance to see the combat at Summit Point in West Va. and at Virginia International Raceway (VIR).

Enjoy the images of the Challenge at the following link: