While my car usually runs at a reasonable operating temperature, I do get a little worried about the potential for getting stuck in traffic, and now that we are in southwest Florida with routine summer temperatures often in excess of ninety degrees overheating could occur.

I have already applied all of the typical tricks for improved engine cooling: aluminum high capacity radiator, baffling to direct the air to the radiator core when the car is moving, shroud around the mechanical fan, improved fan, clean engine internals and etc.

While I do not need an electrical pusher fan in normal operating conditions, I think an electrical fan, operated by a toggle switch in the interior, may provide a good solution for those situations where I find myself sitting in traffic, or in a local parade. One could install a temperature sensitive switch to automatically turn the fan on/off at prescribed temperatures, but I have decided that I will just stick with a simple on/off toggle switch. I really hope that I will rarely need to use the electric pusher fan!

Some others on the various Healey Forums have suggested that an electrical fan may actually block the flow of air through the radiator that could result in higher running temperatures – I hope that will not be the case.

The first step in this little project is the selection of the fan to be used. Factors to be considered include the width, height, and depth of the fan, the amperage draw (not much of a concern given that the Beast has an alternator installed rather than the original generator), and the fan’s output measured in CFMs or cubic feet per minute.

I am somewhat restricted regarding the size of the fan I will use. My aluminum radiator has fan mounting clips already welded to the sides of the radiator and I want to use them for fan mounting. 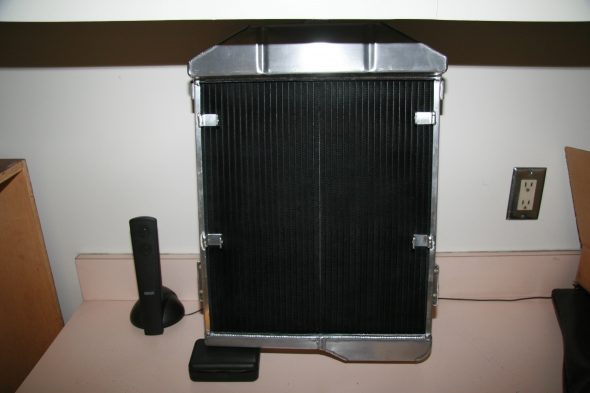 Consequently, a 12” circumference fan is the largest I can use. The “X” body brace in front of the radiator restricts the depth of the fan. A quick measure produced a maximum depth of 3.” Given these parameters I searched the internet for an appropriate solution and decided on a Maradyne product from Summit Racing.

The Maradyne M123K has the following specs: 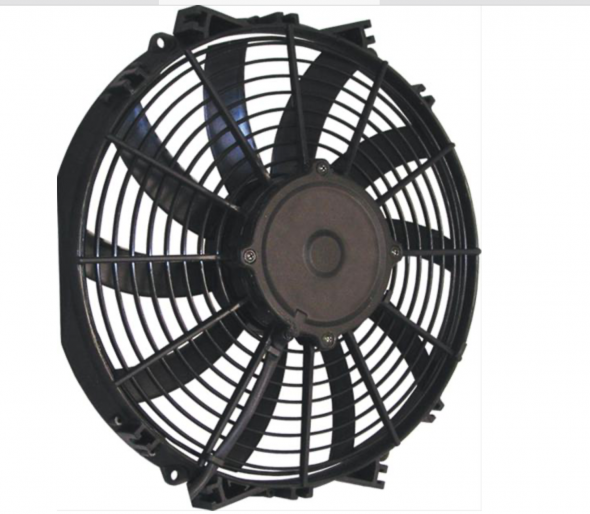 This particular fan can be a pusher or a puller. As shipped it is a puller so the first step is to reverse the fan. To do so one lift the safety catch over the shaft end and carefully pushes the clip off the motor shaft. 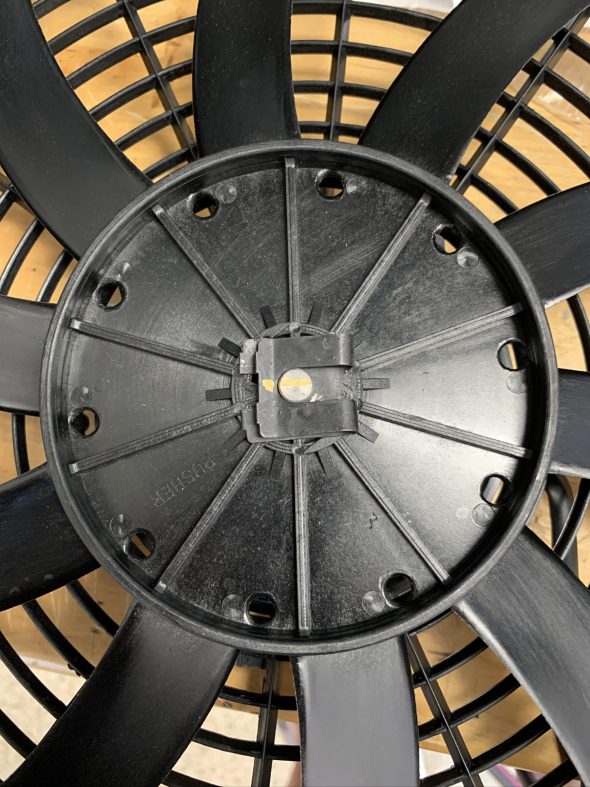 I made the job of creating brackets linking the fan to each of the four mounting tabs on the radiator a bit harder than it needed to be because I did it with the radiator mounted in the car. I really didn’t want to drain coolant and pull the radiator out to make the brackets on the bench. Consequently, some trial and error was involved, but I got there!

Having the car on the garage lift made the task simpler than it would otherwise be. I cut the brackets out of some off-the-shelf steel sheet purchased at the hardware store, and after checking the fit I painted the brackets black for rust protection. I then installed the fan using four 1/4“-28 x 1/2” and four 1/4”-28 x 3/4” stainless bolts and nylock nuts. 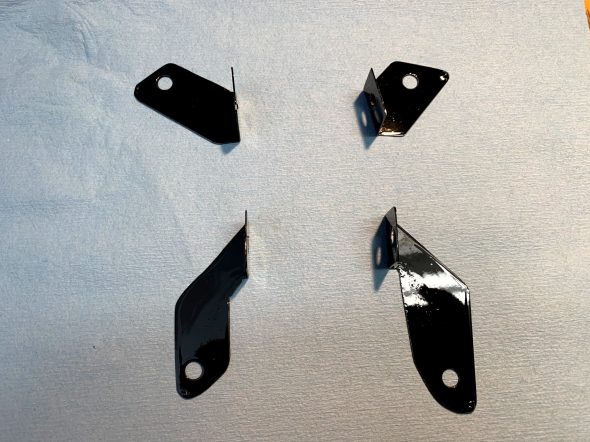 Maradyne supplies four rubber cushions or feet that hold the fan away from the radiator cooling fins: 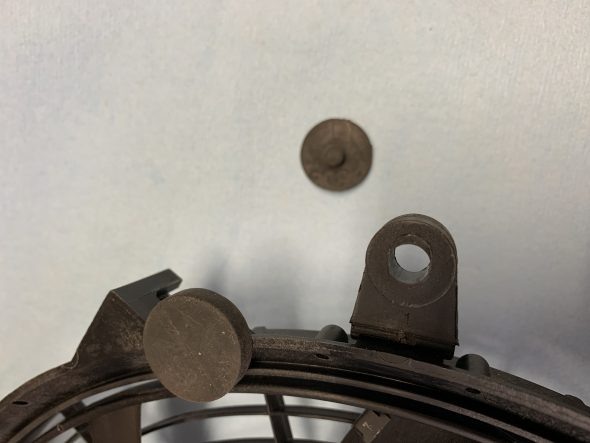 This is a view of the mounted fan from above: 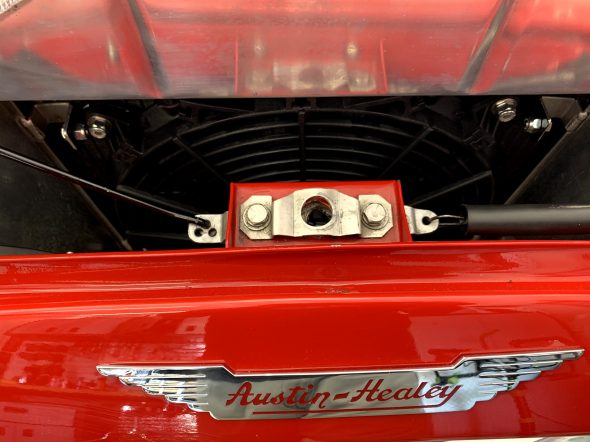 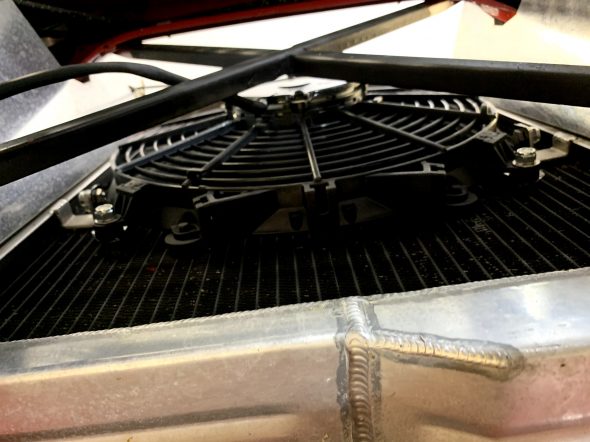 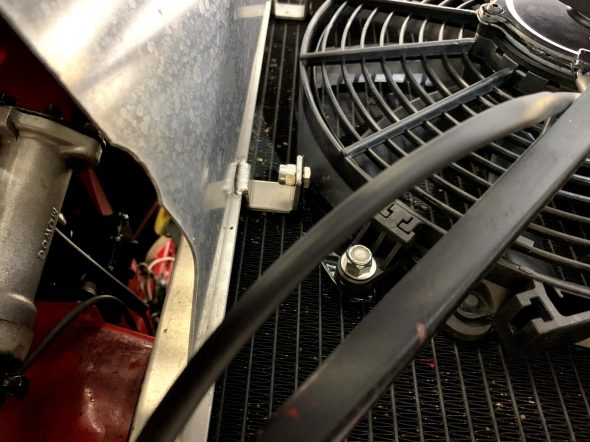 Once the fan was installed, the next step was to install the wiring required.  Before actually doing any wiring, I turned off the master switch in the boot of the car thereby removing power from the electrical system of the car.I used a Fan Relay Harness sourced from SPAL and followed the wiring schematic provided with the harness. 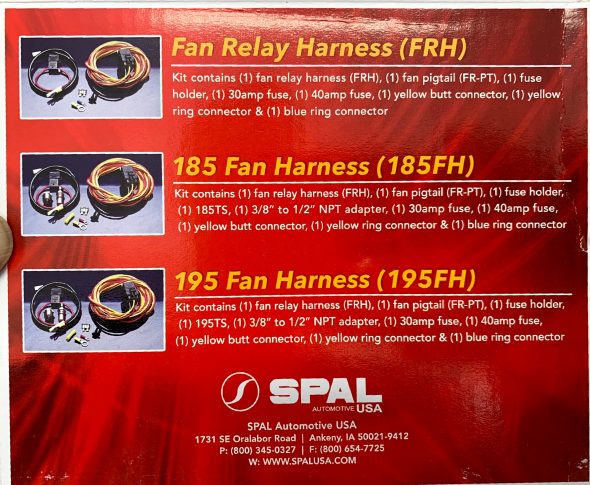 Since I am only using a toggle switch to turn the fan on/off and am not using a temperature controller I followed the dotted line wiring to the switch and skipped the sending unit wiring.

I used a toggle switch I had in my parts bin for this application. 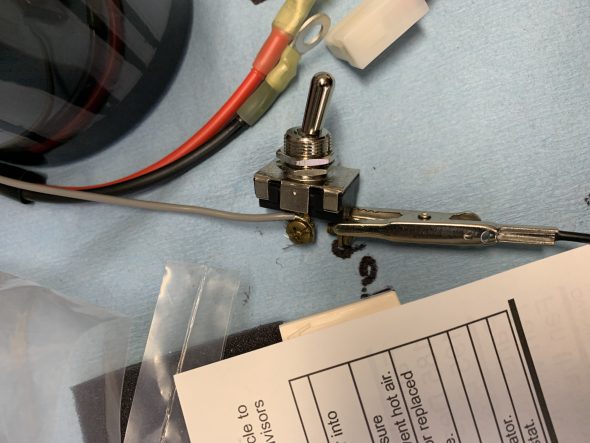 I mounted the relay on the inside of the firewall behind the parcel tray on the passenger side of the car. I wanted to hide the toggle switch from view so after making and painting a little metal bracket for the switch,  I mounted it on the back side of the plywood used to secure the passenger “grab handle.” 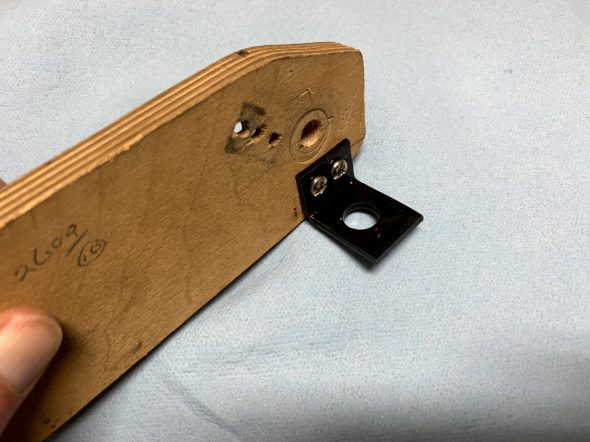 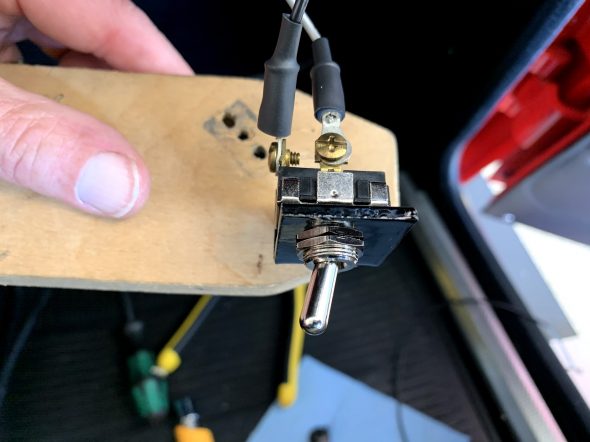 This made it easy to attach the grey wire from the relay to the toggle switch and I made a black wire for the ground connection from the switch to a screw on the inside of the firewall. 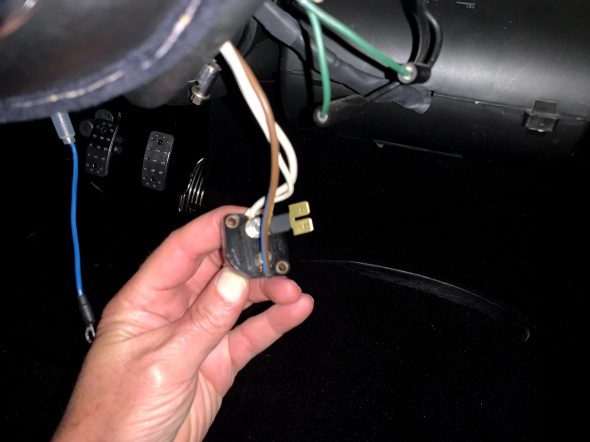 The yellow and red wires from the relay exited the interior through an available rubber grommet on the firewall into the engine compartment. The yellow wire, after splicing in the 30 amp fuse, was then connected to the starter solenoid as a battery power source.

The red wire followed other wiring down the diagonal RH frame brace to the front of the car where it attached to the fan wiring pigtail. The red wire connects to the black wire on the pigtail, because the wiring was reversed when the fan was converted from a “puller” to a “pusher.” I then made a short black wire to connect to the blue wire on the fan pigtail and attached it to a ground screw near the grille of the car.

I then turned on the master electrical switch in the boot, and turned the key to the “on” position of the ignition switch, and flipped the toggle switch to the fan. I immediately heard the whine of the new fan and I knew I was in business!