Having just installed my engine and gearbox into the car chassis, I thought it might be useful to keep track of the various related installations and connections that need to be made before one turns the ignition key and hits the starter button to fire-up the refreshed engine. I will try to journal this check list of items in the sequence that they are addressed, though I may find that I need to modify the chronology as things unfold. 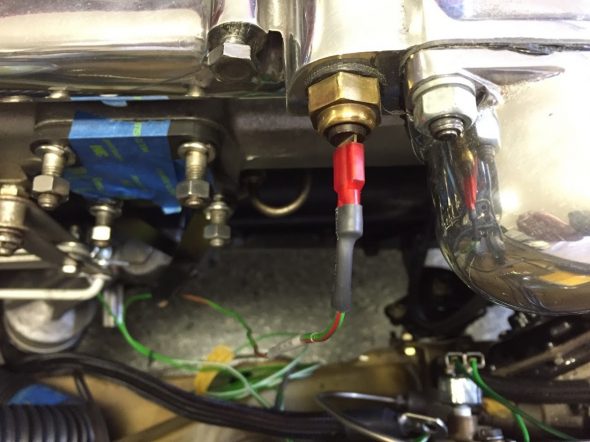 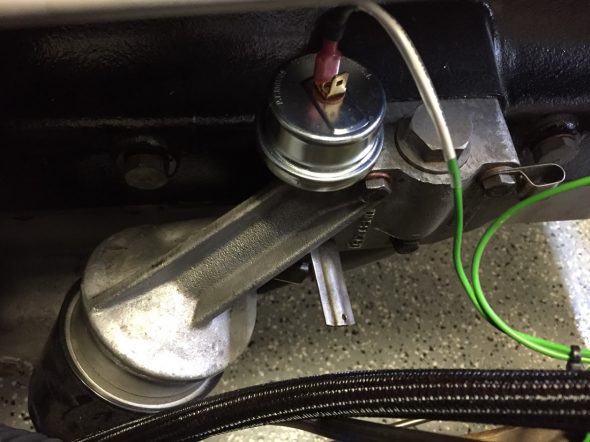 3. Dip Stick – I discovered that the placement of the electric steering pump interfered with the free travel of the dip stick. I found it to be easier to shorten the dipstick than to move the pump! 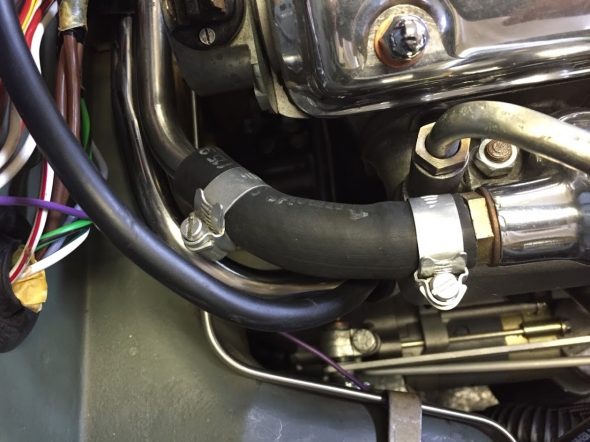 5. Heater Return Pipe Hose Connection to the Front Return Pipe at the Side of the Cylinder Head – the XK’s Unlimited stainless pipe does not fit well so I have ordered and offset hose to hopefully compensate for the poor fit.

6. Checked the firewall wiring Ground Strap to Chassis path to make sure all of the wiring is routed under the heater pipes, clutch hydraulic pipe and hose and the alternator cable, note the position of the clips. On final assembly the loose wiring will be in a wire look cover: 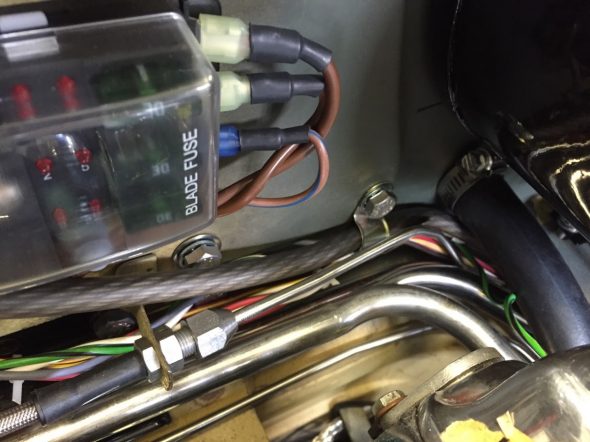 7. Wiring Clips below the heater. Two yellow zinc clips, one for the alternator cable, and the other for the collection of smaller gauge wires: 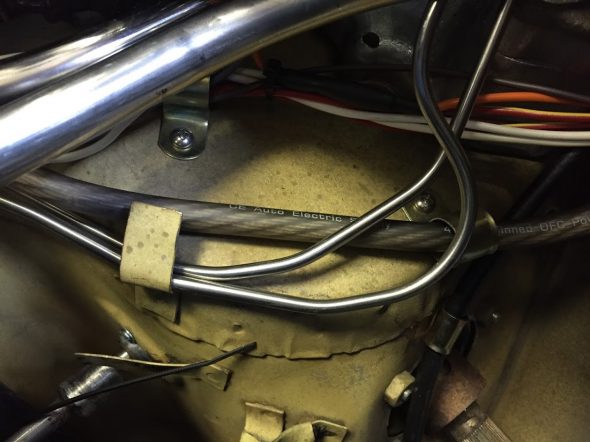 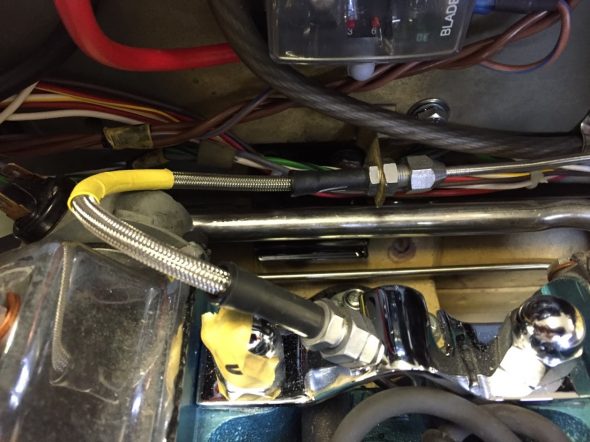 9. Starter Cable – The cable was previously connected to the starter. The other end was routed to the rear lug of the starter solenoid and secured with a rubber boot over the connection: 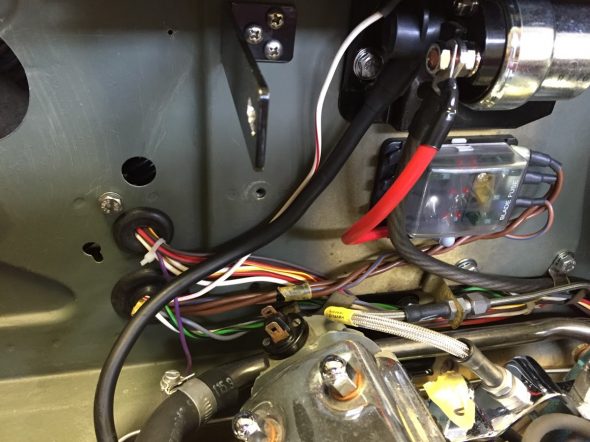 Cable from Starter to Solenoid on Firewall 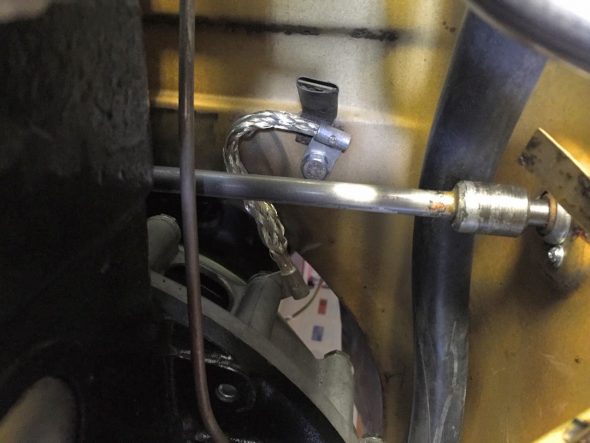 Plenum Hose clamp at Firewall and wiring below pipes 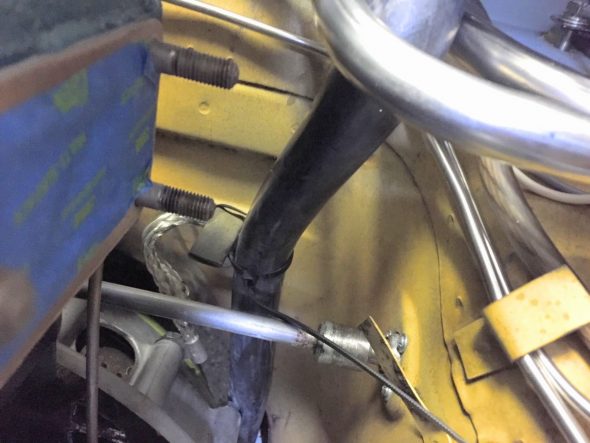 12. Installed the alternator and its primary cable from the ANL Fuse on the LH engine bay valance. I took advantage of a captive nut already located on the valance as a place to install a yellow-zinc clip to secure the alternator cable. 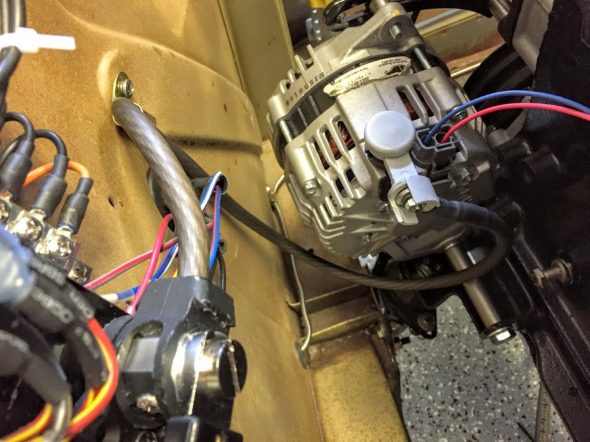 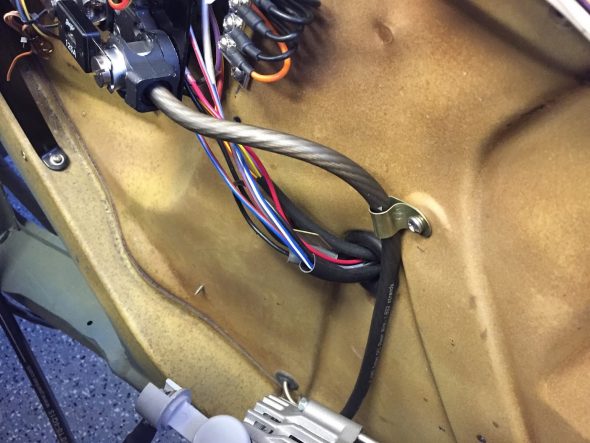 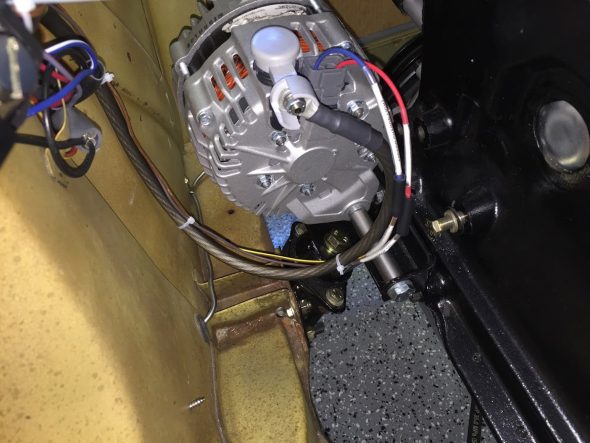 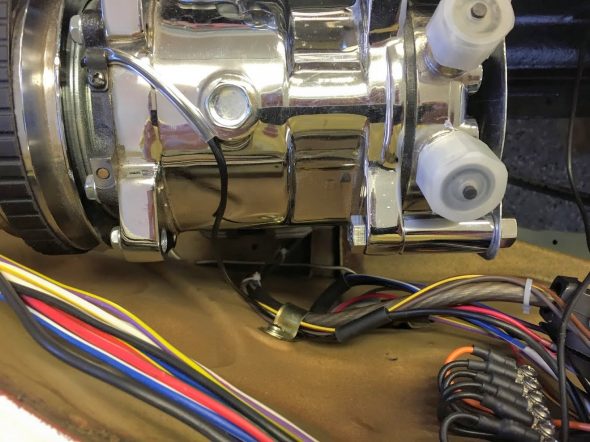 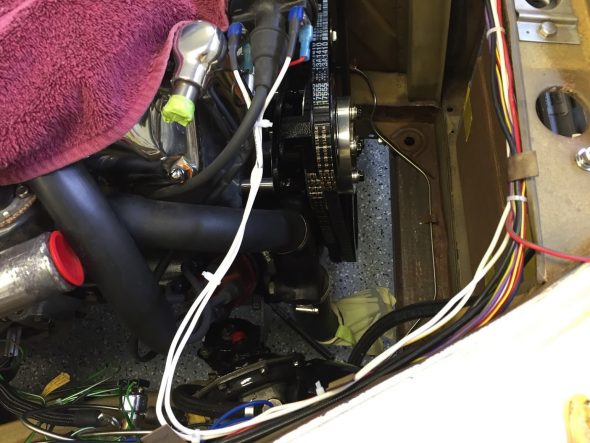 16. Reservac Tank Vacuum Hose – from brake servo reservac tank check valve to the vacuum line at the RH side of the cylinder block: 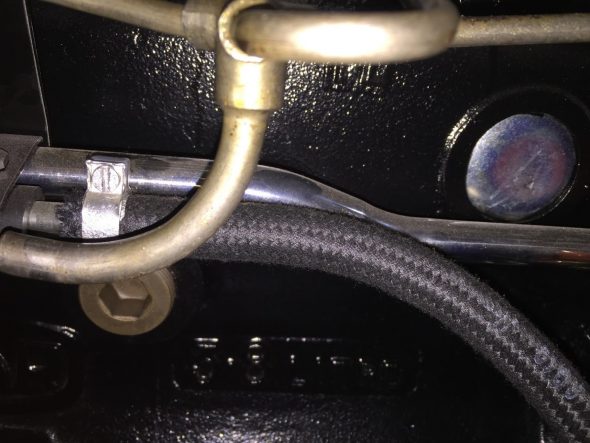 17. Reverse and Top Gear Switch Wiring at Gearbox – Rather than routing these wires as Jaguar did (through the gearbox tunnel) I decided to install a rubber grommet in the tunnel and run the wiring to the interior of the car. Each wire was then connected with two-way snap connectors and will be hidden by the central console: 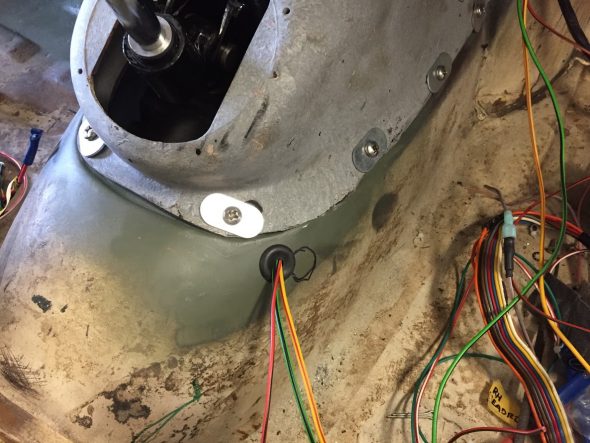 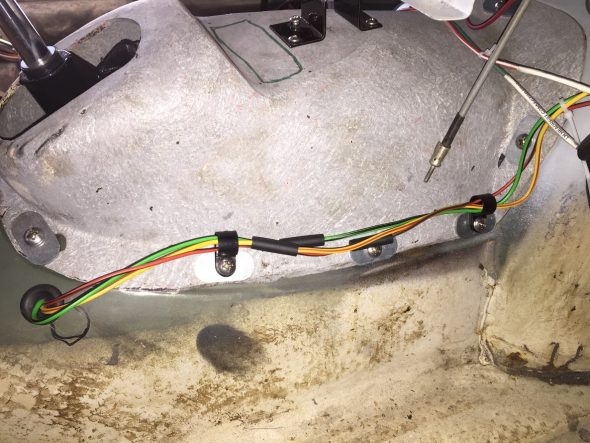 18. Change Speed Lever, Rubber Grommet and Retaining Ring – I removed the lever knob and slid the grommet over the lever shaft ( a little petroleum jelly doesn’t hurt), punched holes in the grommet with an awl and installed the ring and grommet with four #4 x 1″ chrome slotted finishing self-tapping screws. 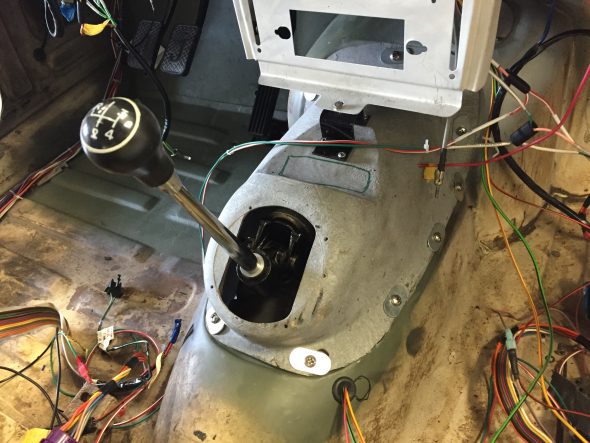 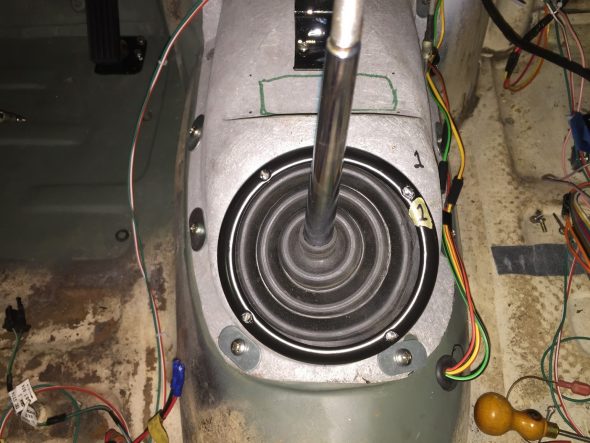 19. Breather Assembly – The breather hose/pipe for the engine originally routed to the air cleaner where the mist would be recirculated into the carburetors. In my case, I am not using the original air cleaner and I did not want to recirculate the emissions from the breather pipe to the fuel system anyway.

I chose to use a catch can manufactured by Mishimoto. The can is a very clever design. 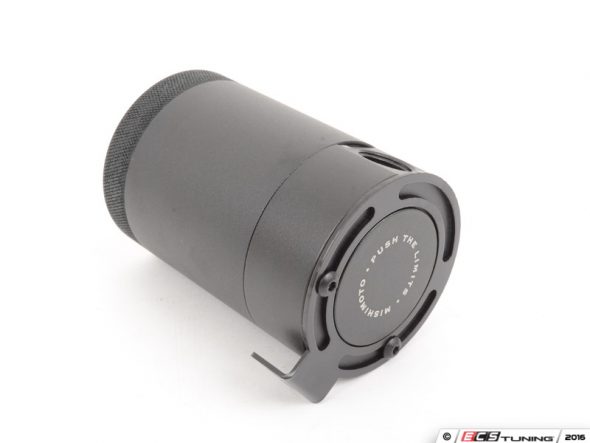 Of course, a Jaguar owner cannot have a product with a Japanese name on it visibly mounted in the engine bay, (never mind that many of the newer parts used in the restoration probably were produced in China!) so I chose to mount the can on the front suspension crossmember. At this location it is very easy to access to check accumulation. I also used a K&N Filter for the outlet port.

The elbow hose from the breather port on the engine is a 5/8″ I.D. but the fitting on the catch can is a 3/8″” barb so I used a barbed brass step down fitting between the 5/8″ hose and a 3/8″” hose. The straight emissions hose runs from the elbow almost straight downward, and parallel to the servo breather hose, to the catch can. 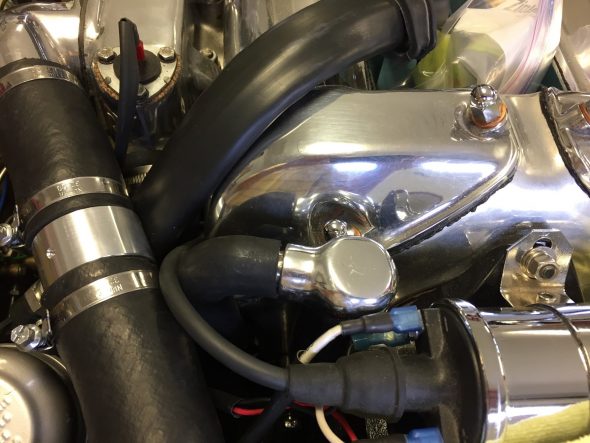 These photos are dark and it is a challenge to see the mounting of the can. I was able to use a hole that was already in the front crossmember so it was not necessary to drill any holes to mount the catch can. Always a pleasing outcome! 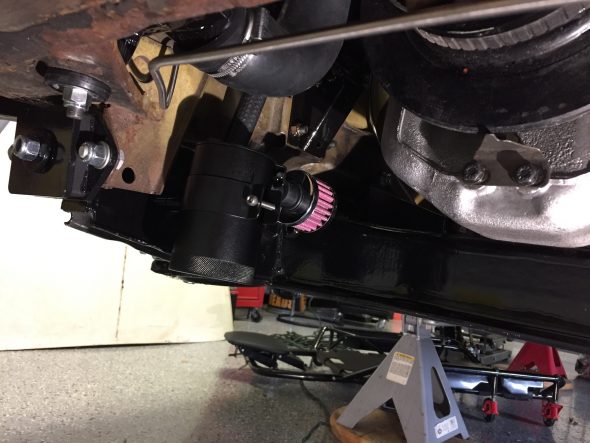 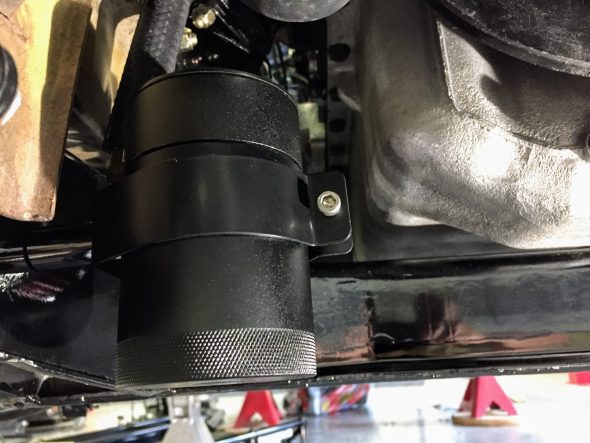 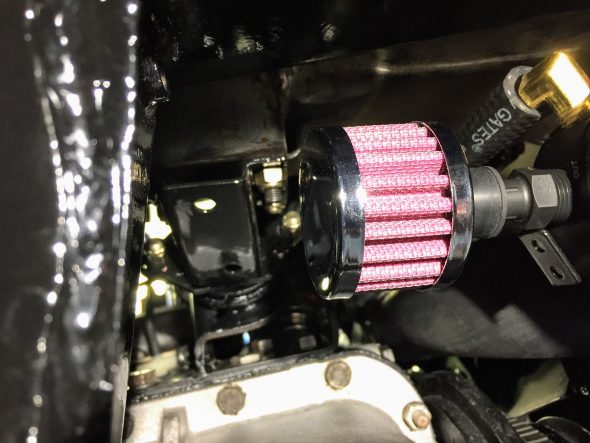