The engine and gearbox were purchased from Rivergate Restorations. After driving the Bugeye on the Washington Beltway to bring it home the first day, Dad and I knew that we would have to get some additional horsepower in the Sprite. The Rivergate  setup was just perfect. We were very pleased with the product and the service.

Installed engine and transmission. Reverse of removal process. Unfortunately we got the engine mounts reversed and backwards which resulted in a great deal of frustration in seating the engine. Finally with a little outside help we corrected the problem and the engine went in like a charm. It did require a little beating with a hammer on the plate below the heater box so that the transmission would clear. Of course, the header and carbs had to come off the engine before placement in the engine bay. 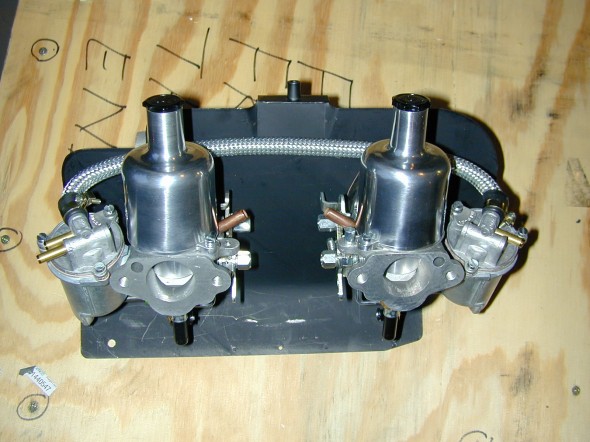 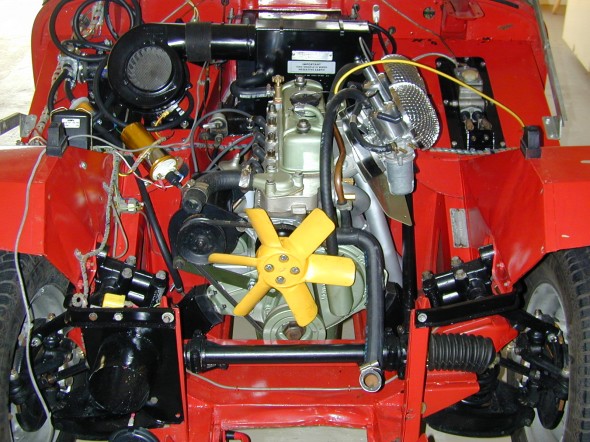 New 1275 In Place from Rivergate

A link to the shop manual for the Datsun Gearbox is provided below in case maintenance is needed at a later date: 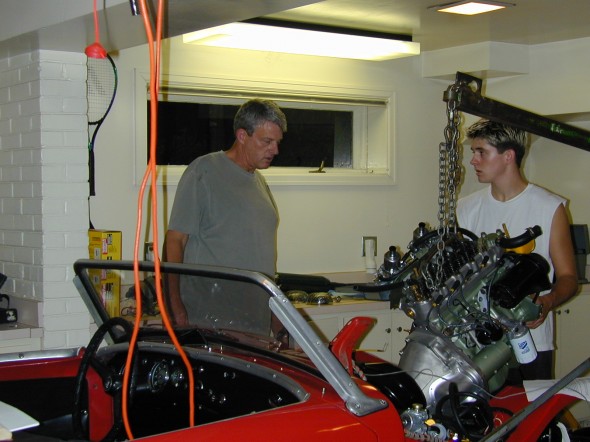 I Know it Will Fit! 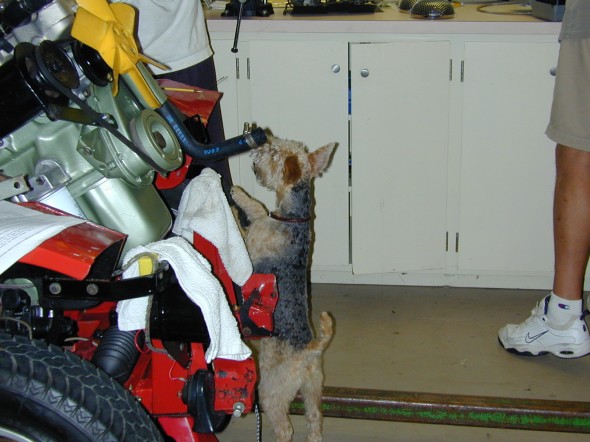 A Little Help from Bella

Discovered that we needed a 1275 yellow plastic 6 blade fan along with a spacer so that the blades will clear the breather on the timing cover – frustrating!

Installed generator. Will convert to the alternator after we get the motor working properly at a later date.

Put 2 1/2 pints of Valvoline synthetic gear lube in the transmission. This required a long length of clear plastic tubing to the transmission fill hole on the driver’s side of the tranny.

Installed new intake manifold from MiniMania and new carbs from Moss. We later discovered that this manifold sat too high and resulted in a dented bonnet. It had to be replaced with a stock unit.

Put a little carb damper oil in each carburator.

Bled the brakes and the slave cylinder for the clutch.

Installed driveshaft. Beat the universal joints unmercifully and they finally came apart. Installed the new ones supplied by Rivergate.

Installed exhaust system which required fabricating a bracket for the rear mount.

Installed a leather shift boot from a later model midget so that the datsun B210 shifter lever would fit a little better, rather than using the original metal boot.

Installed new SU fuel pump in the engine compartment rather than at the rear bulkhead and ran fuel line to the carbs. This approach is not recommended, but everyone who has done it says that it has worked fine for them. The theory is that it gets too hot in the engine compartment, but others suggest that it is cool enough at this location. The mounting bracket is the same one used at the rear of the car. It is just bent to fit with nylon spacers. 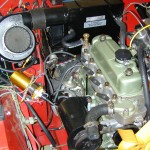 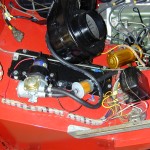 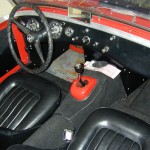 Poured a little oil down the banjo bolt to lubricate the oil pump.

Attempted to start the car, but it failed to fire. Had the car towed to Coachworks. We had set the carbs too lean to fire! After minor carb adjustment, and timing the car started and ran well.

Installed the bonnet and bumper. Discovered that the MiniMania intake manifold made the carbs sit too high. The carbs dented the bonnet when one of my friends attempted to force shut the bonnet by standing on the bumper.

Then the proud moment came! I took My Bugeye out for its first drive. 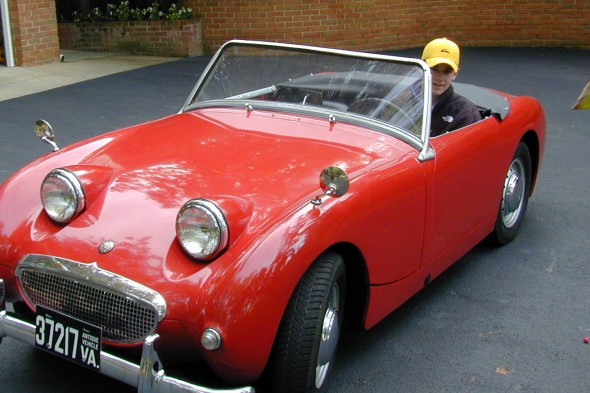