I am now waiting on Jack Harper to get free from his shop duties at Coachworks to come by the house and help me with starting and tuning the engine. While waiting, I took a few moments to check on  sealing the firewall from fumes and heat emitted from the engine bay. I turned off the the lights in the garage and put a shop light in the engine bay and then inspected the firewall for any light coming through the firewall. As expected, I did find a few places, so I used a little 3M body caulk to seal the holes.

Another variance from originality on my project is the “personalized” arm rest. Its standard location makes it virtually useless as a functioning arm rest while driving. I am going to make a wooden box to fit the arm rest pad sourced from Heritage Upholstery and Trim to serve as a storage console and to lift the height of the pad to make it work as an arm rest while driving. I will cover the box with matching black carpet and hinge it at the rear of the pad. To begin my little project, I made a mock-up of the box from a cardboard shoebox. For me, 2 3/4” appeared to be the proper height of the box, with the cushion on top of the box. 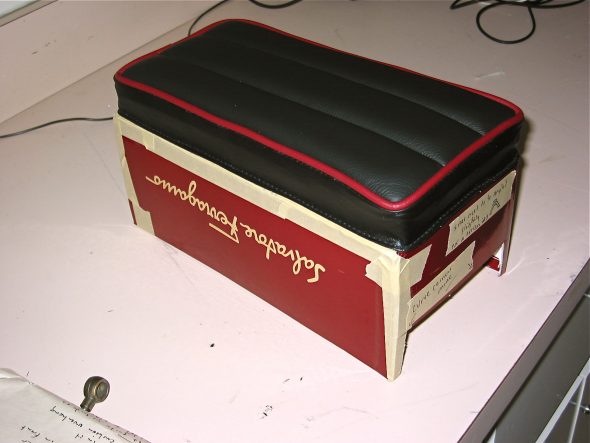 Jack Harper came over to the house and we readied the engine for starting. First, we connected the cables for the throttle and choke. While the previous injection of oil through the engine should have sufficiently lubricated everything, I still pulled the spark plugs and turned the engine with the starter until the gauge showed oil pressure. I put 5 gallons of fuel in the tank and we turned on the ignition to try out the fuel pump. The carb float chambersfilled and we were then ready to try firing up the Bloody Beast.

We reinstalled the spark plugs, turned on the ignition and hit the starter button. After about 10 seconds we had the engine running! Jack ran the engine up between 2,000 and 2,500 rpms and then we adjusted the carbs to bring the idle down to about 700. After 30 years another Healey is saved and running. It was an exciting moment.

I did have two problems to be fixed. I had taken apart the hot water valve, cleaned it, reassembled and installed it on the engine. It leaked! So I ordered a new one to replace the original. The second problem was my own stupidity! I did not replace the  Toyota gearbox real oil seal and I quickly discovered that I should have as a pool of MT-90 formed under the car. New seal ordered also. Cannot wait to get both pieces, install them, and get her running again!