1997 Corso Rossa Ferrari Red Paint – It was a very long day for Jeremy, but in one day three coats of red and two coats of clear coat were applied to the frame and superstructure. As a nervous expectant father, I waited for Jeremy’s call and then went to his shop around 7:00 pm to see the results. I could not have been more pleased. I am really happy with the color of the red. It is going to be beautiful after accent pieces in black and chrome are applied! 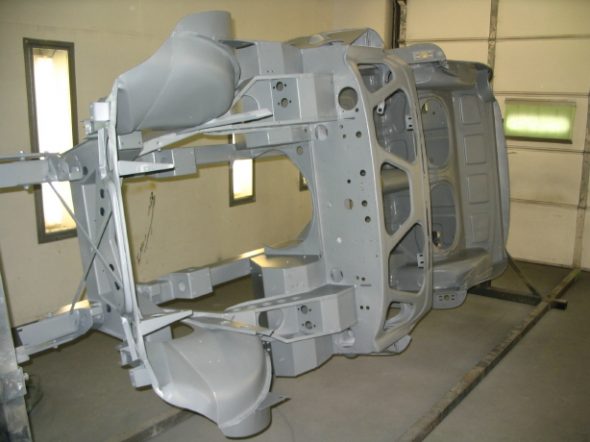 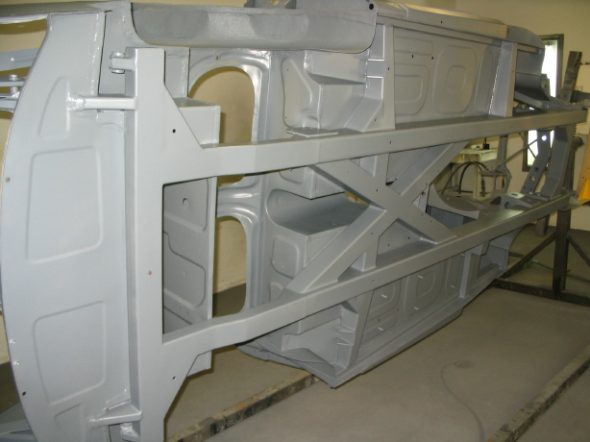 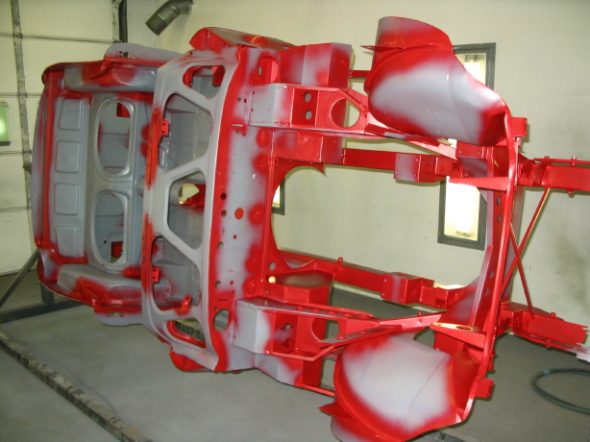 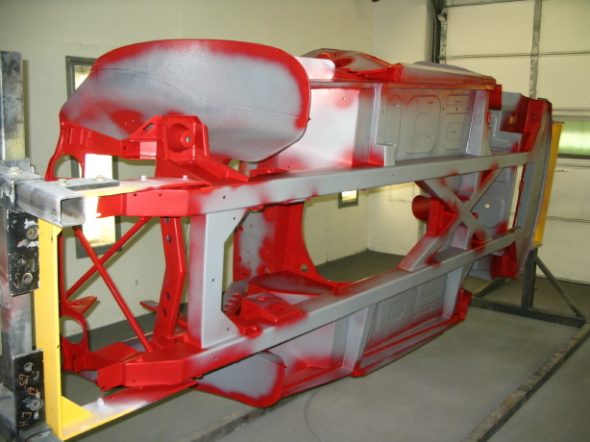 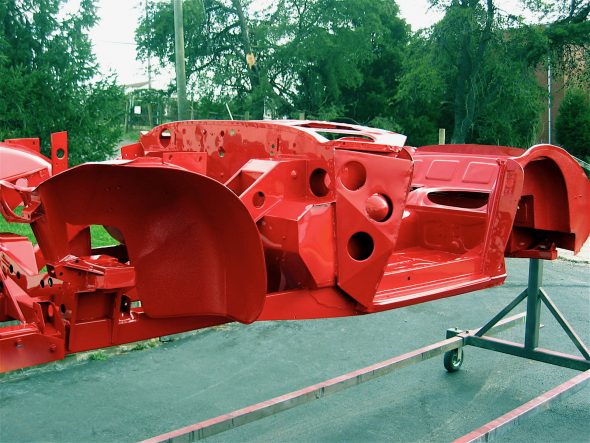 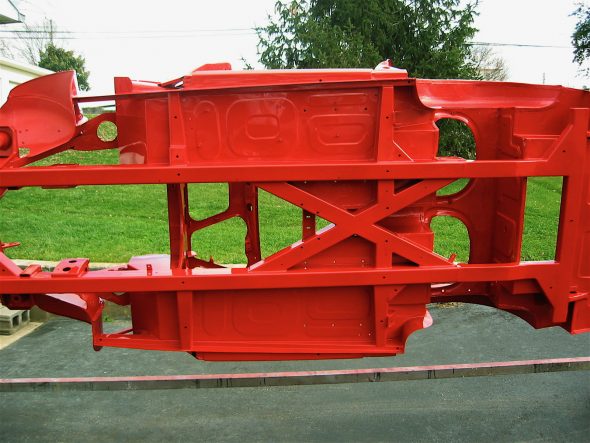 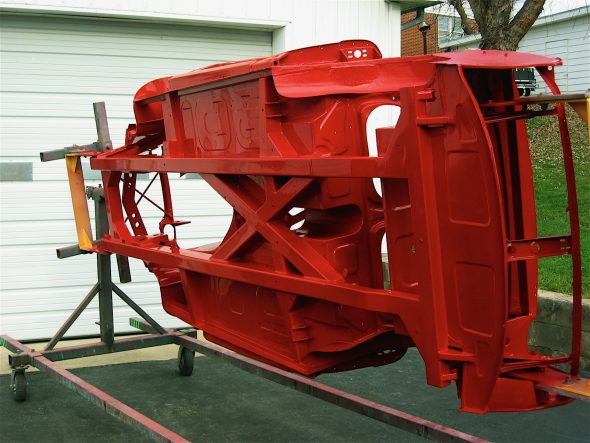 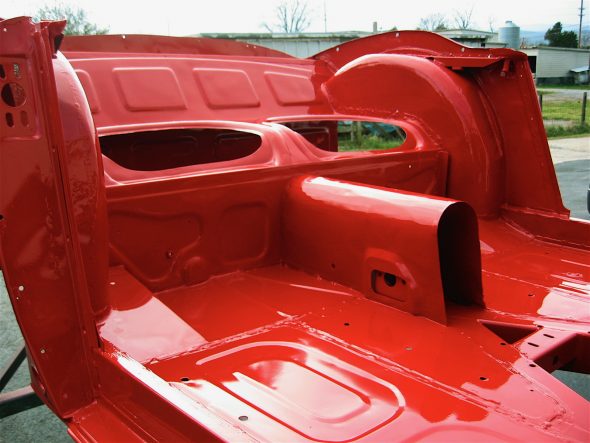 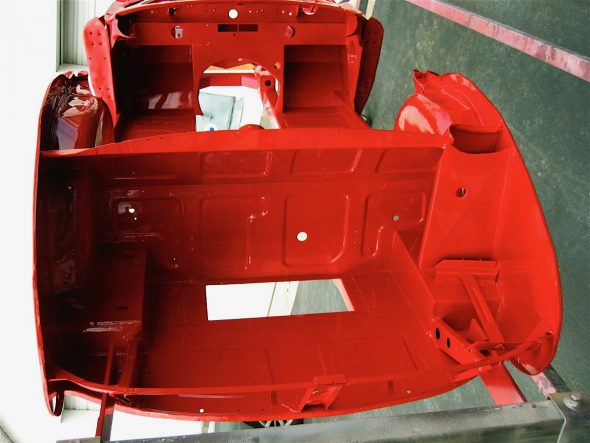 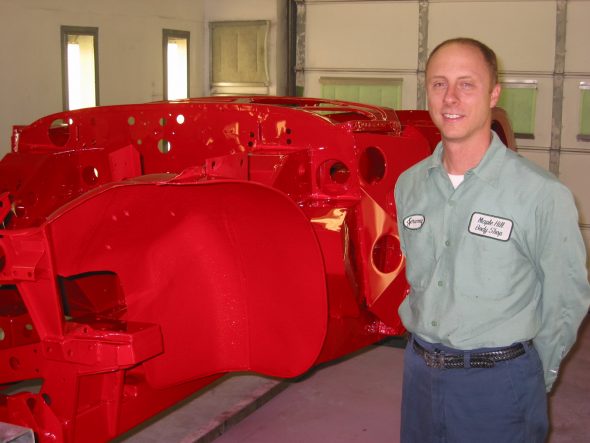 Jeremy got the tub off of the rotisseri and back on the dolly that I had made so that it could be transported back to our home, “Oakview.” 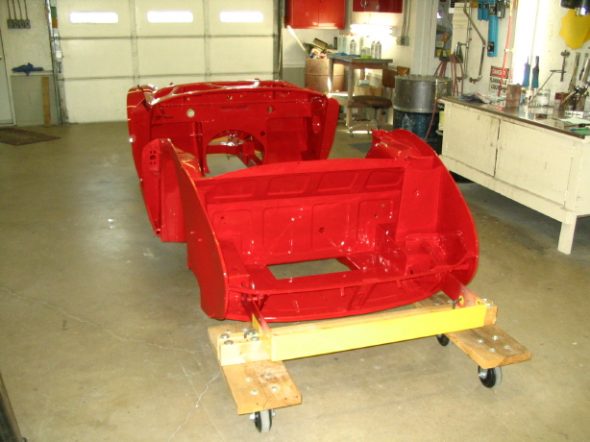 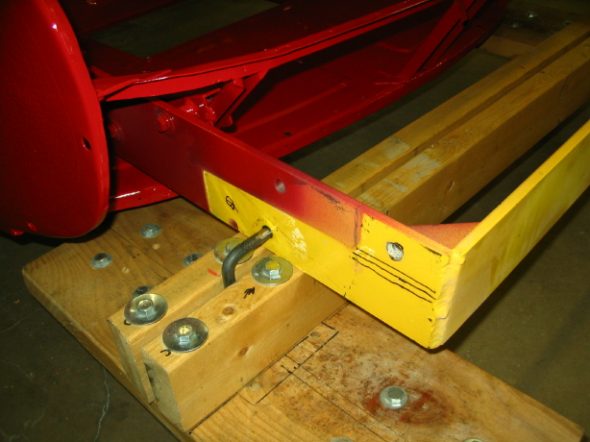 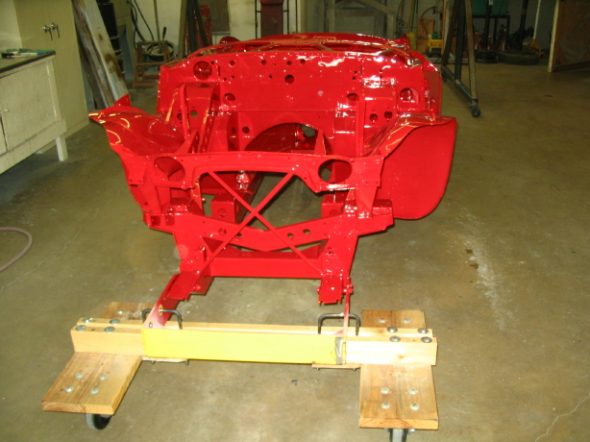 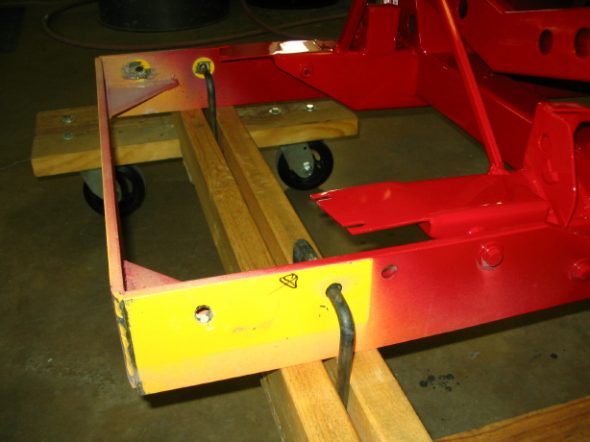 Return to Oakview –   December 7 was the 65th anniversary of Pearl Harbor but it was also the day the “Bloody Beast” came home from Maple Hill Restoration. It was an exciting day. Now the assembly begins, but nobody told me that a phobia would develop. I am afraid to touch the thing for fear of scratching something. It is just so beautiful. I am very pleased with the color. 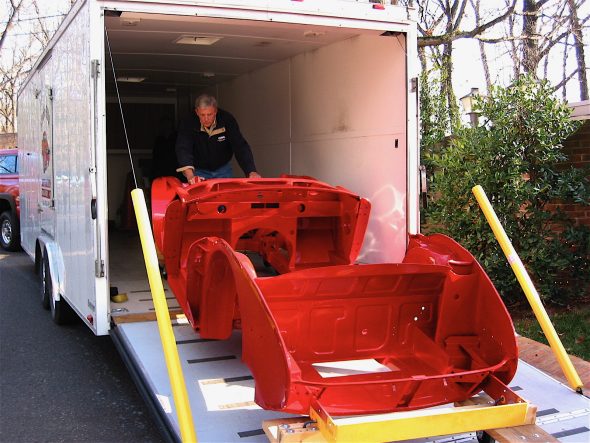 The new baby is delivered 2 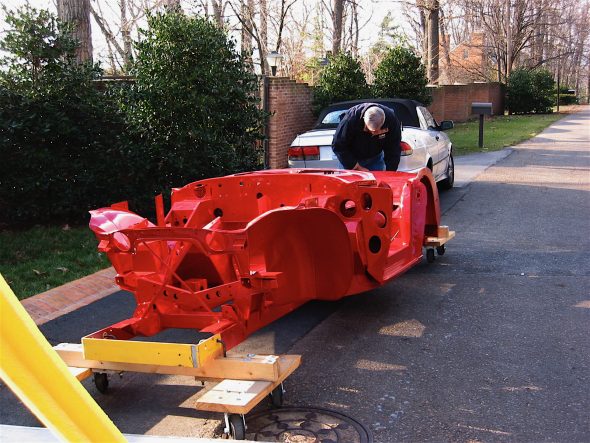 The new baby is delivered 3 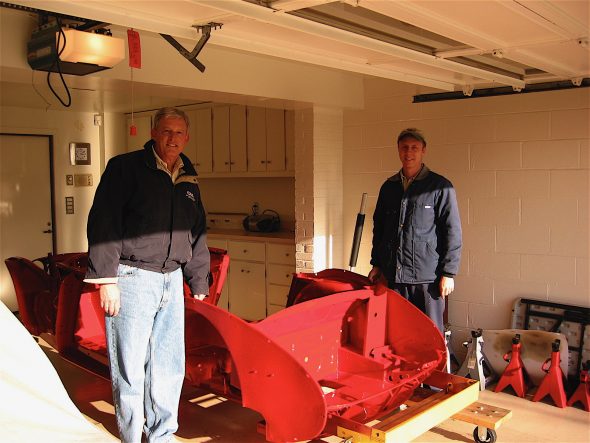 The new baby is delivered 7 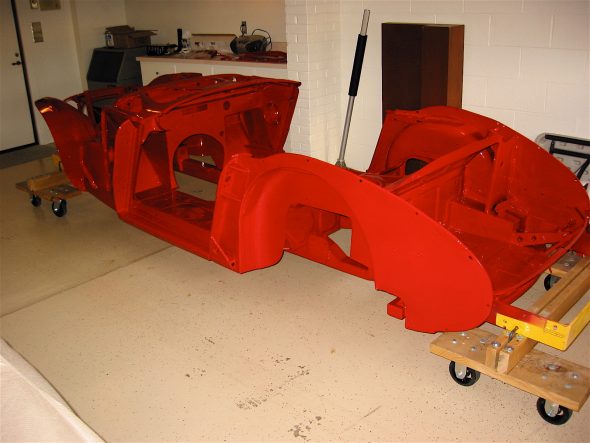 The new baby is delivered 8

And here is a “before and after” shot. Just a little difference. 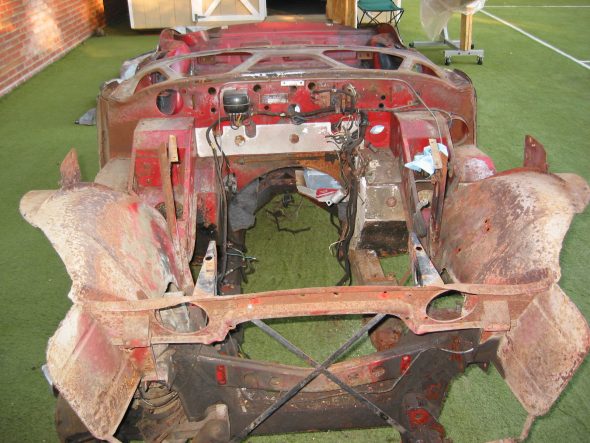 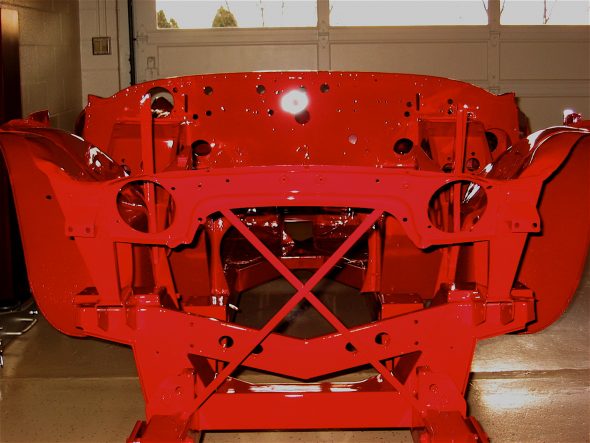 The new baby is delivered

Back to Jeremy’s Shop

More Black Bits – There were still some pieces to finish that needed to be painted gloss black. Jeremy finished those up and I will pick them up next week after they have dried. 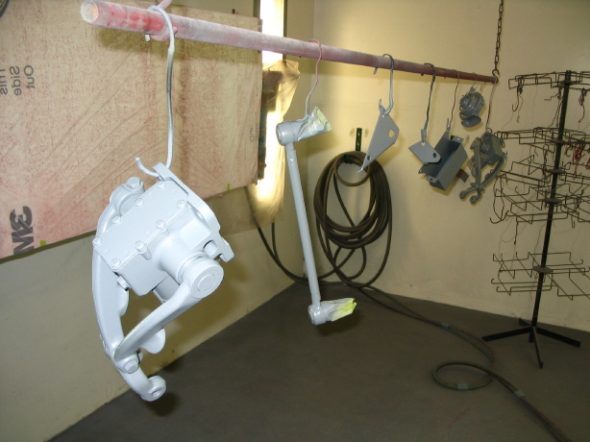 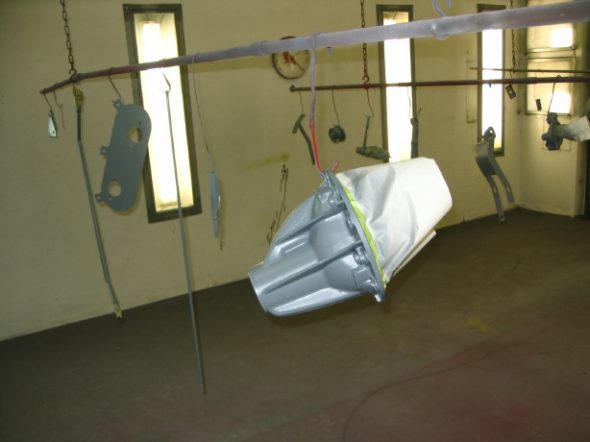 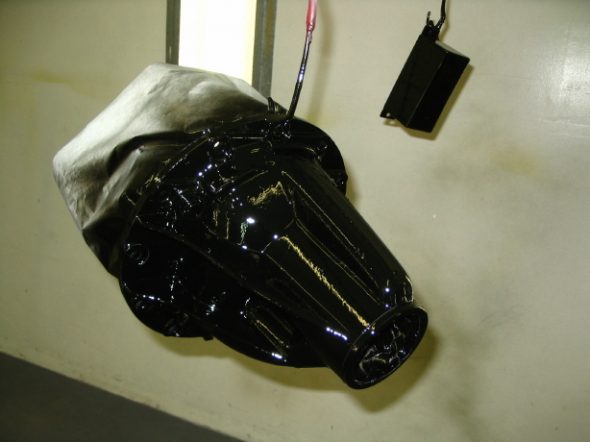 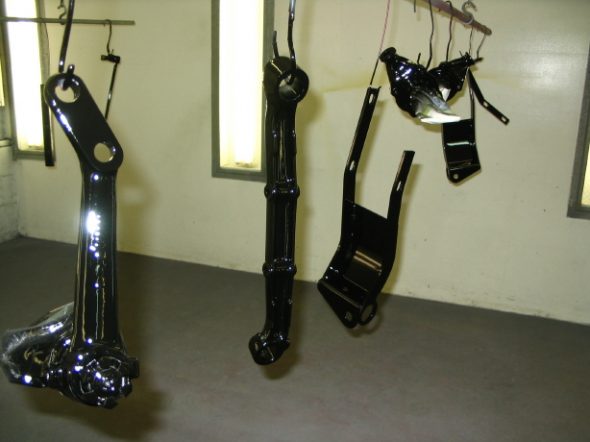 The Oil Pump Again – I have been trying to decide about what to concerning the rebuilding or replacement of the oil pump. Jack Brashear reported knowing a good machinist who rebuilds the pumps, so I purchased new gears and will be sending it off to have the pump rebuilt. Too many people reported problems with the quality of the new pumps.

Rear Springs – After completely disassembling, painting, teflon taping, and reassembling the new BT7 leaf springs I had purchased, a conversation with Martin convinced me that I should use some custom made springs that are made by a fellow Martin knows. He claimed that the stiffer Jule frame would “beat the original design springs to death.” Oh well, I have become pragmatic about these things – wasted time, money and effort! I wish I had known about the spring situation earlier. This will slow me down but I want to do it right.