So, here is a step-by-step of the process from tear down to completion. More than anyone (except me) would want to know. I first removed the air cleaner that I have been using for ten years from the carbs. Next was removal of the throttle return springs with a note about orientation of the springs on the lever and the intake bracket: 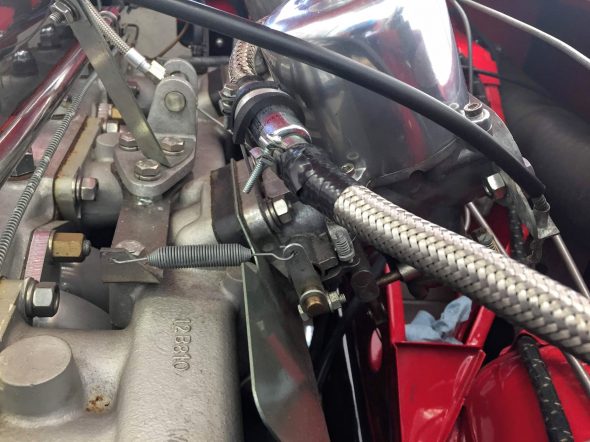 Then the hose connecting the two carbs could be removed: 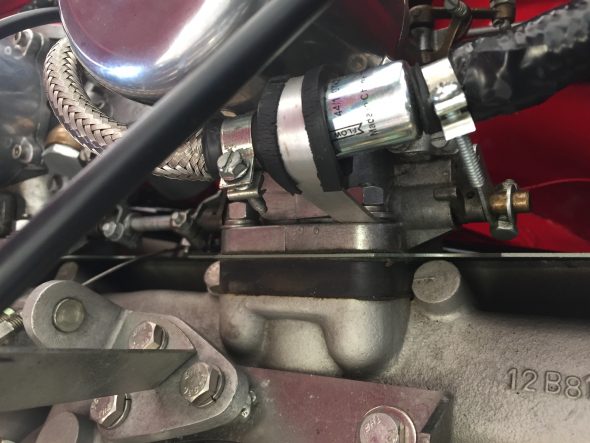 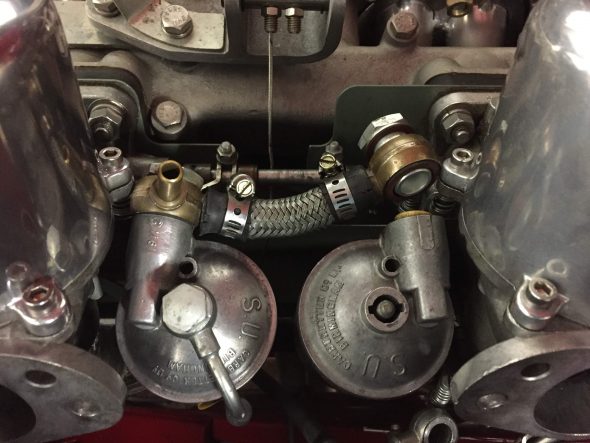 I then removed the choke brackets from each of the Carburetters and loosened the cable retaining nut on each of the chicken levers, so that the cables were free. There are three (3) ballpoint pens springs in the cable to make the cable retract. I left the spring-loaded cable in tact. 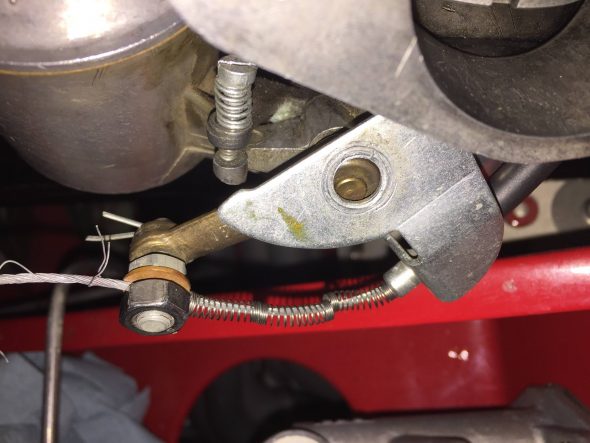 The rubber hoses from the overflow pipes at the float bowls were then removed. The float bowl banjo nuts are removed with a 1/4 inch Wentworth wrench. The hoses run through a hole in the insulated het shield. 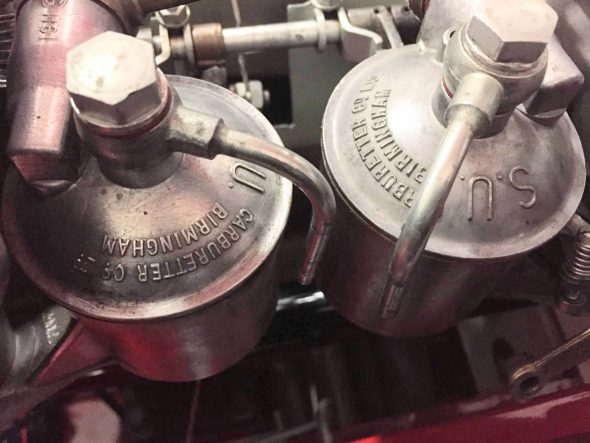 I then disconnected the vacuum line at the rear carburetor that connects to the distributor. 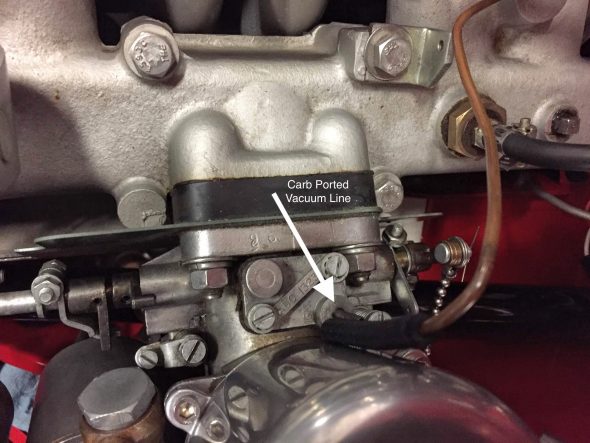 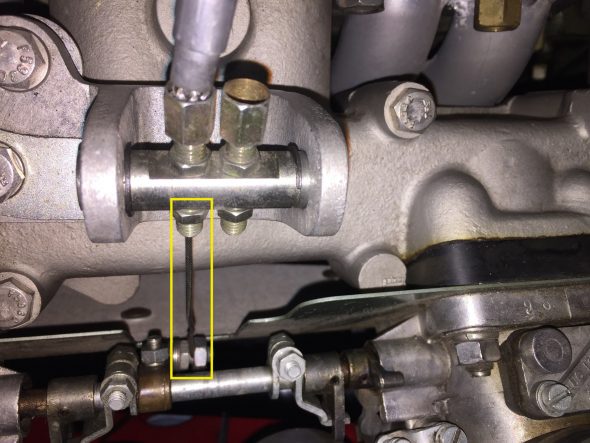 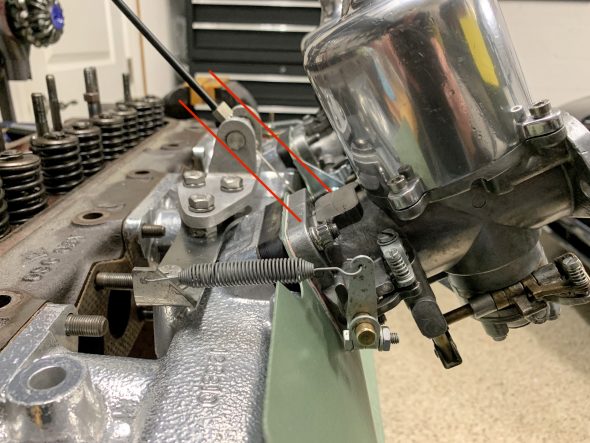 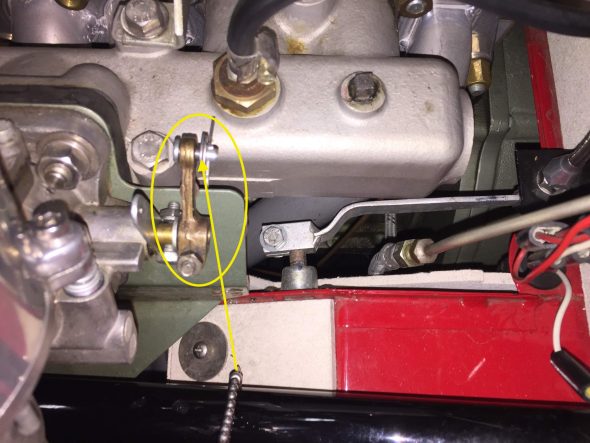 With all of those components disconnected, it is then possible to remove the carbs from the intake manifold. This is done by loosening and removing eight 5/16″-24 hex head nuts, flat washers and lock washers from the manifold studs. By the way, getting to the lower studs can be a challenge! Before lifting away the carbs and float bowls check to see if the float bowls are empty of fuel. 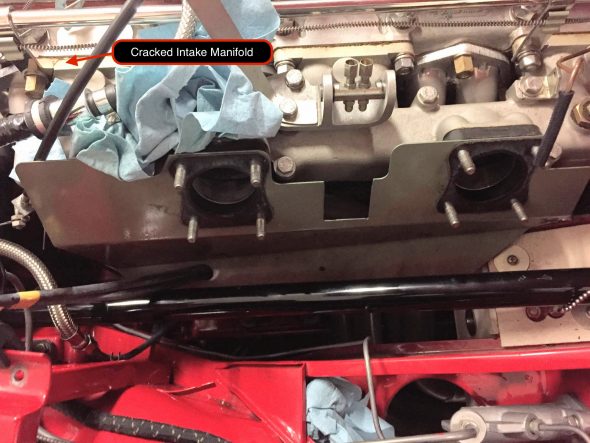 My intake manifold had a crack in the front mounting ear. It can be seen in the upper left of the image above. I located another used manifold from Michael Salter. I had the manifold Jet-Hot coated which gave it an almost chrome appearance. So while the carbs were being tended to, it was the perfect time to go ahead and replace the manifold. Several steps are needed to remove the manifold.

First was to detach the vacuum hose from the rear port on the intake that is used for the cruise control. 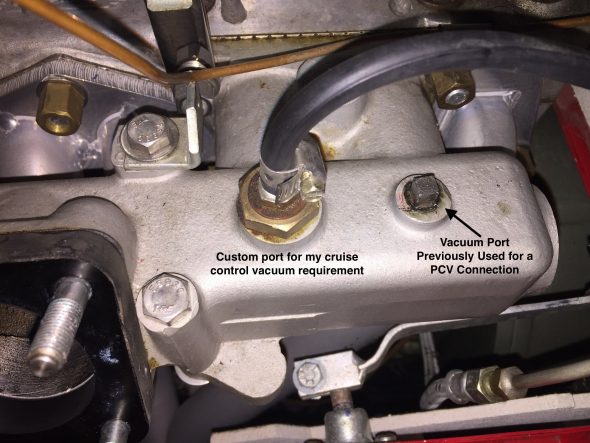 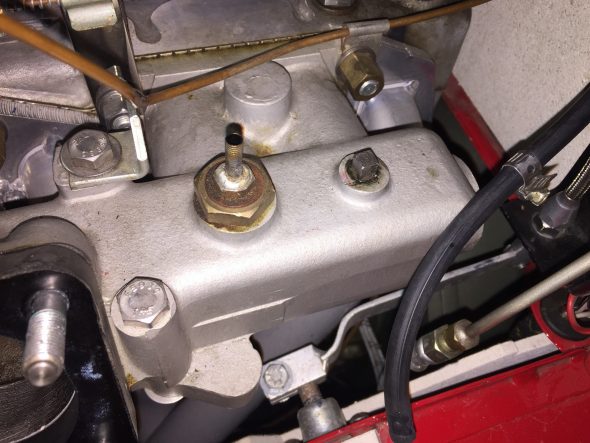 I then removed the front choke cable from the throttle bracket on the intake manifold. 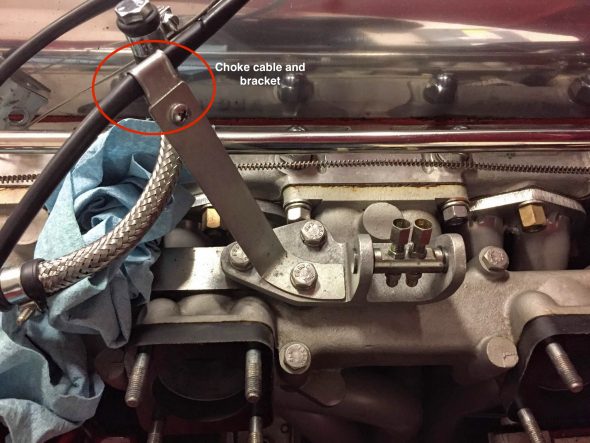 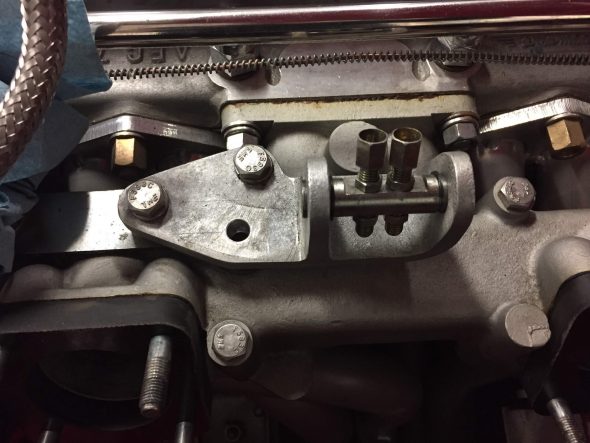 Upper Portion of the Throttle Bracket 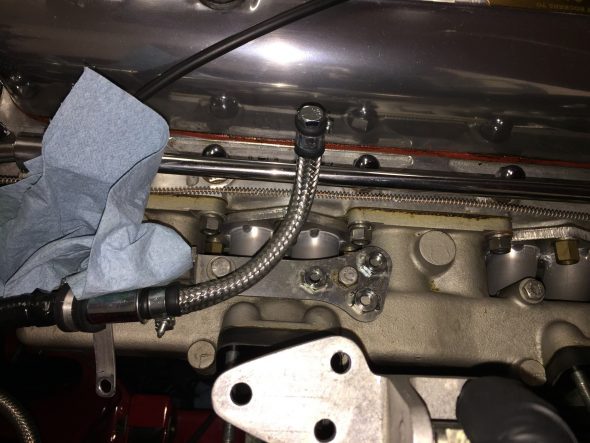 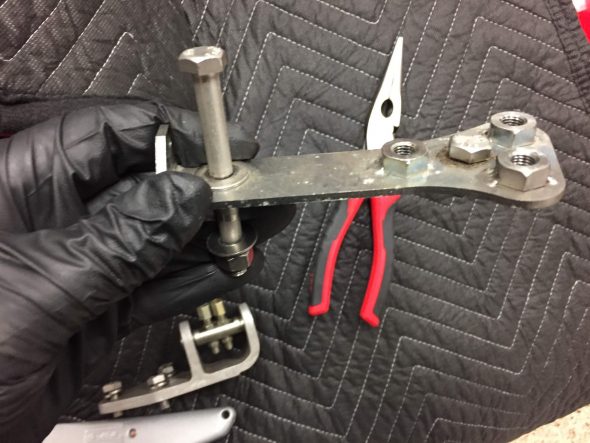 The water pipe for the heater is mounted in two locations and these must be loosened to permit the removal of the intake manifold. This requires loosening the clamp on the radiator hose extension. You lose a little coolant, but not too much. The pipe can then be lifted aside allowing access to the manifold. I also unclipped the water temperature sensor cable from its clips. In the image below it is easy to see the crack in the manifold ear. 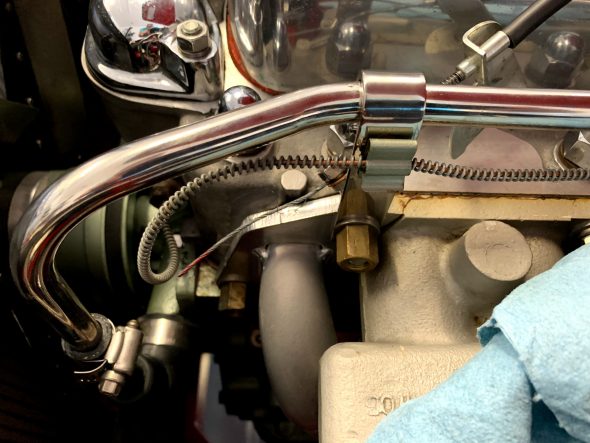 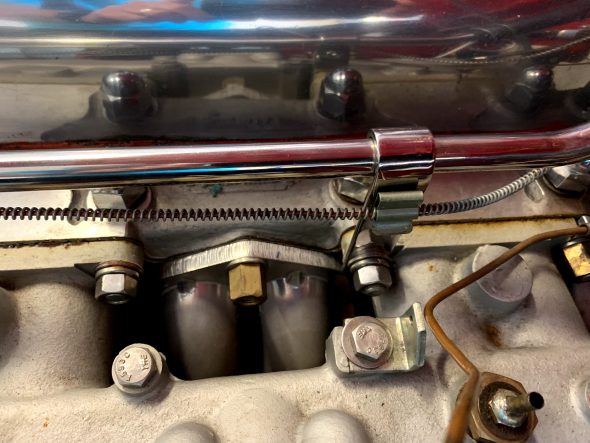 I had saved my original iron cylinder head and it came in handy on my workbench for setting up the intake manifold and carbs. The weight of the head supports everything and makes mocking up everything and adding intake components much easier than working in the car! 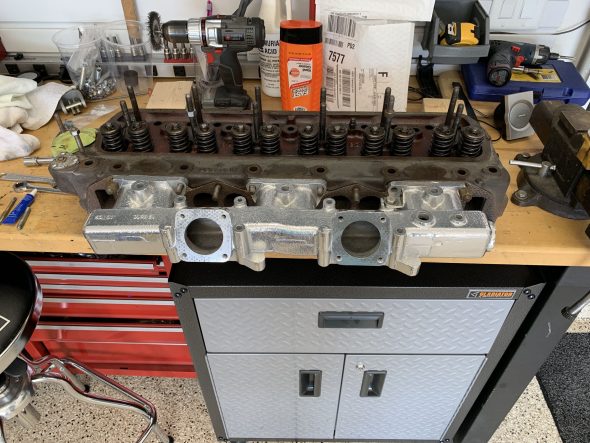 I double-nutted and removed the carb mounting studs from the old manifold and installed them in the new manifold after chasing all of the threads to clean them out. I used compressed air to blow out all of the stud mounting points. 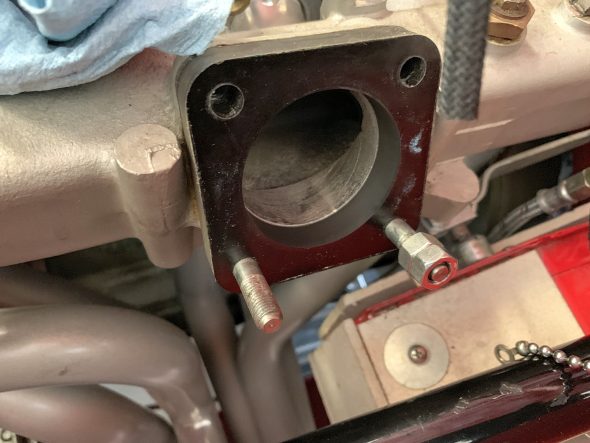 After installing each of the studs into the intake manifold I placed one gasket and then the spacer block on the manifold. 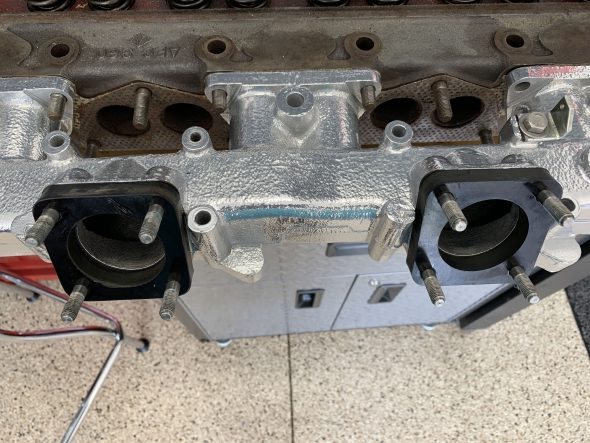 I removed the fitting for the vacuum used for the cruise control from the old manifold and reinstalled it in the new manifold with thread sealant and a new copper crush washer. 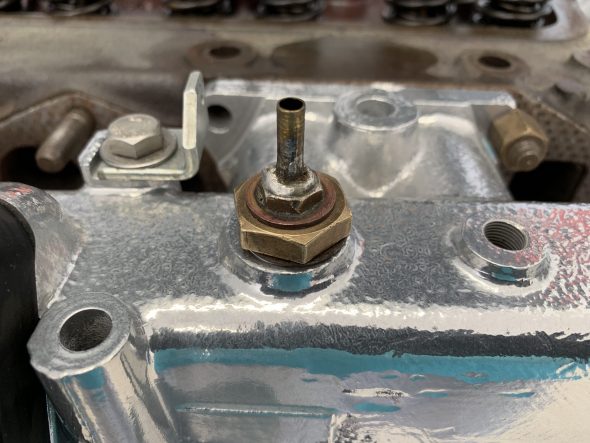 And, then replaced the rear vacuum port plug that screws into the threaded hole in the manifold. 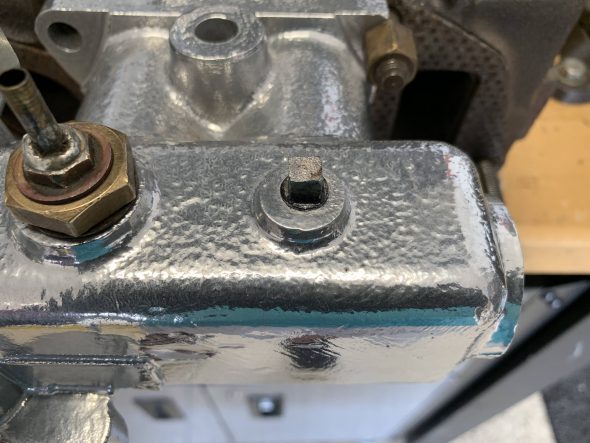 I then transfered the two 5/16 inch bolts that go through the intake manifold and originally mounted to the exhaust manifolds. Since my car uses exhaust headers these mounting points or not used, so I simply install bolts and nuts into the car holes. 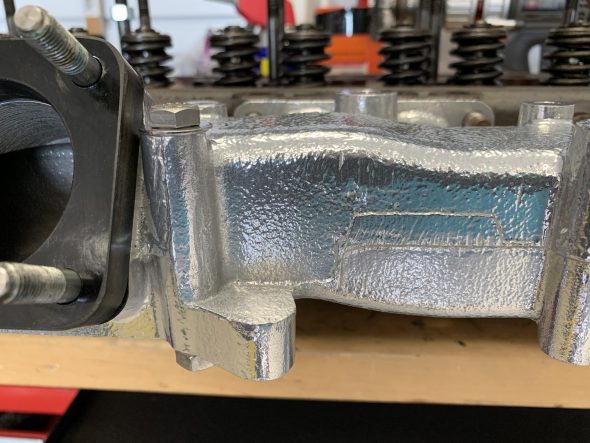 The original intake manifold design incorporates two fittings for fuel drain lines. I used both for the past ten years, but I decided to plug the rear drain hole with this rebuild. I really don’t know if there will be negative consequences to this or not. I did this because the rear drain line was extremely close to the rear header pipe. I just didn’t like that little copper pipe being so close – less that 1/8″ – from a hot exhaust pipe.

I am aware that some after market intake manifolds do not include the drain line fittings so I hope that this suggests that these drain lines may not be required? The image below shows the brass pipe fitting installed in the manifold. 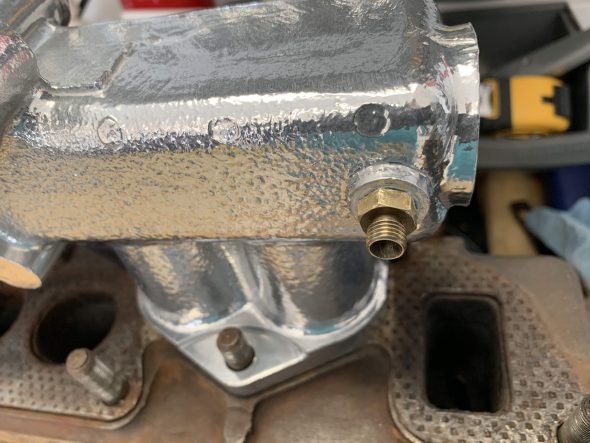 I then remounted the Dennis Welch Throttle Cable Bracket to the manifold. 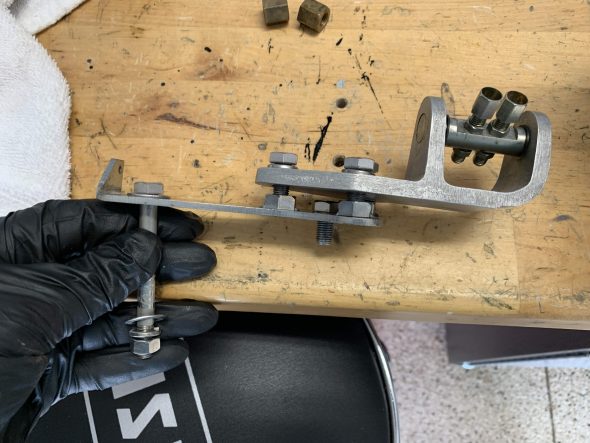 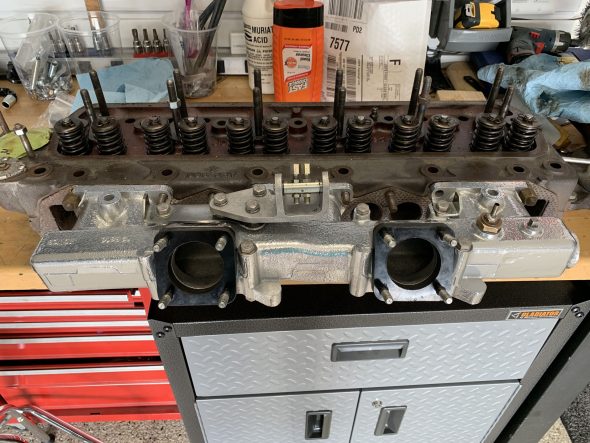 During some down time in this process I cleaned up the heat shield and repainted it. 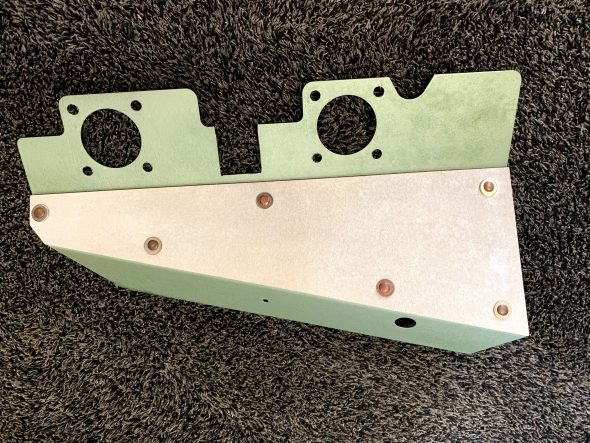 I then put two new gaskets on each of the inlets in the manifold for the mounting of the heat shield. 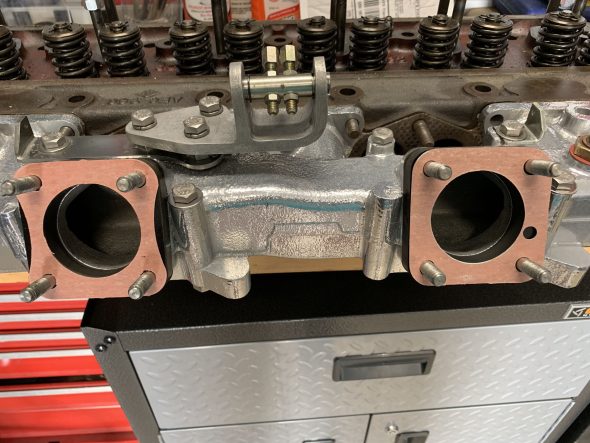 I then mounted the heat shield and added two more gaskets for the carburetors. 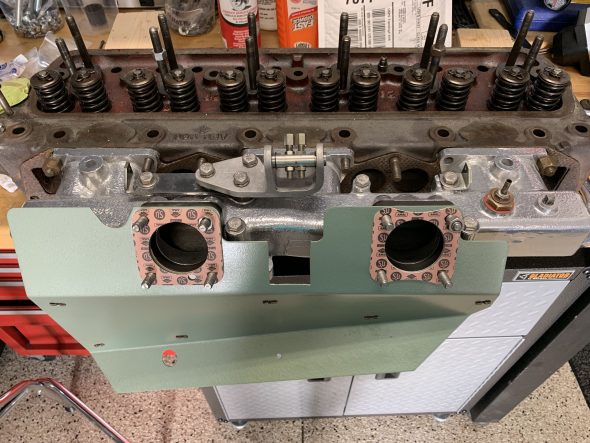 At this point, I was ready to install the rebuilt carburetors to be described in the next post.