Since the last entry, the axle was painted with POR-15. The preassembled MG Midget brake assemblies were mounted to the axle and rotated to be in the proper position to align with the handbrake rods. Initially they were installed in the wrong orientation. The 3.9 differential was installed in the axle as well as the new cunifer brake pipes. The brake pipe union was cleaned and polished. A new Goodridge black stainless brake hose was connected to the union using a new copper crush washer. 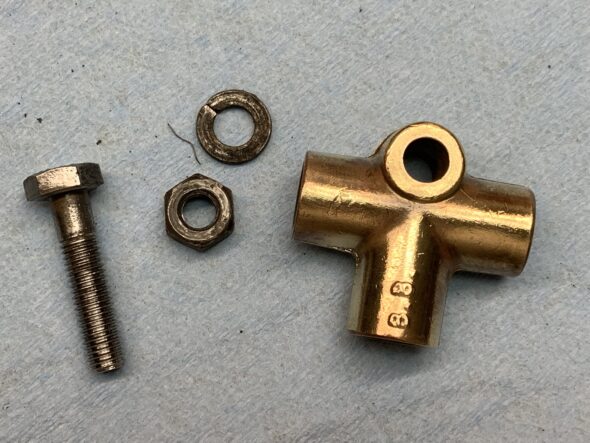 A new brass Land Rover axle breather was purchased and installed on the axle. The MiniMania adjustable handbrake rods were painted and connected to the brake levers and the compensator lever with new clevis pins and felt anti-rattle washers. Finally, the rubber rebound buffers were attached to the axle with the ends of the split pins facing to the front of the car and rubber caps were placed on the bleeders. All of this work is shown in video Episode Nine.

Installing the hubs turned out to be a much more challenging job than expected. Based on what others had shared we were under the impression that swapping the original brake assemblies for the later Midget brake assemblies was a plug-and-play process. At least in our case, it was not! As can be seen in the next video, the flange on the Midget back plate stood higher than that on the Bugeye original backplate. This meant that as the Hub was pressed down until it was seated, it was fouling against the backplate flange making it almost impossible to turn. Video Episode Ten shows the problem we faced.

When the Sprite Forum members were queried about this problem, others did mention the possibility of this problem. It was suggested that the flange should simply be trimmed about an 1/8″ so that the hub would not contact it when pressed down fully. So, we got out the Dremel and did just that. Fortunately, that solved that problem.

Following installation of the hubs, I noticed that one of them was still encountering some resistance in rotating. Turned out the the raised portion of the hub where the studs are located was ever so slightly touching one edge of the brake cylinder. While I was not happy with my solution, it did solve the problem. This can be seen in video Episode Twelve. 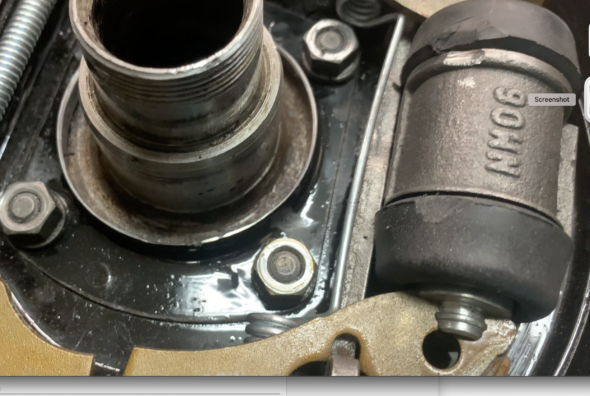 True to form, when we installed the brake drums on to the hubs we once again encountered resistance to turning! This easy swap to later rear brakes has not been without its challenges. Sure enough, after checking with others on the Sprite Forum it turned out that people did often have to grind down the outside edge of the drums to get them to fit without fouling against the backplate. Whether this is an issue with drum manufacturing tolerances or some other issue – we just don’t know. So, out came the angle grinder with a cut off wheel and we cut some of the drum away and smoothed the edges as best we could. Once again, we aren’t happy with the approach, but also once again, it solved the problem. Everything now rotates freely. The video Episode Twelve shows the process.

A number of Bugeye owners have suggested switching the original 4.22 rear differential for a 3.9 differential from a later Sprite or Midget. We located a 3.9 in North Carolina. We had it checked out by Glenn’s MG in St. Petersburg. He installed a new pinion oil seal and set the pinion pre-load to factory specification. We cleaned up the pumpkin and painted it with silver caliper paint from POR-15.

The Episode Eight video provides details on the 3.9 differential installation and background.

In addition to a general clean-up and painting, it is our intention to replace the original Sprite MK 1 Bugeye rear brake assemblies with later rear brakes from a MG Midget. We had transitioned to disc brakes from a later Sprite or Midget in the front of the car shortly after it was purchased in 1998. The larger rear brakes should provide improved braking in concert with the front discs.

A number of owners had suggested switching out the 4.22 differential that was in the MK 1 Sprite for a later 3.99 diff. Dad was able to locate a good 3.99 in North Carolina so we purchased it. We then had Glenn’s MG in St. Petersburg go through the new diff to ensure it all looked good and we also had him install a new pinion seal and set the pinion pre-load to factory specification.

New bearings, gaskets, “O” rings, and tab washers will be installed in the hubs. A 1 7/8″ socket is used to remove the axle nuts. One must remember that the LH wheel nut loosens by turning clockwise while the RH wheel nut loosens in a counterclockwise direction. New radius arms were recently installed so they will be removed and then re-used. Bilstein tube shocks were installed several years ago https://valvechatter.com/?p=7674 and they will also be removed and then re-used. The propshaft universal joints will be checked.

The handbrake cable must be disconnected and the connecting rods were removed as new adjustable rods are required with the later MG rear brakes. The rubber rebound straps  were removed and will be replaced with new straps.

The half shafts were replaced a number of years ago with hardened steel shafts. They will be re-used.

The Episode Seven video is rather long but it details the removal of the rear axle and all of its related components. https://vimeo.com/745178474/88a9f43bba

Having made the decision, for at least the time being, to revert to the original Lucas 25D distributor that is being rebuilt by Jeff Schlemmer at Advanced Distributors we went ahead and removed the Crane XR700 Fireball electronic ignition module from the car. The Episode Six video shows the removal of the unit and provides information on the wiring connections from the Crane module to the ignition coil and the distributor. 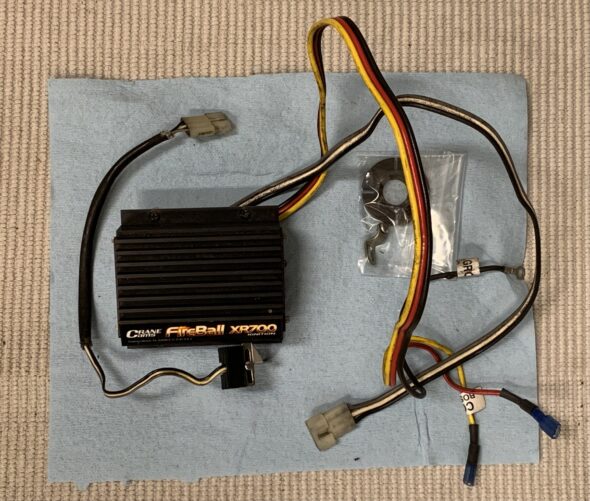 Trying to use a timing light to set ignition timing is extremely difficult on the Bugeye given that the pointer on the timing cover used for alignment with the notch on the crank pulley is at the bottom of the engine.

Tom Colby at Speedwell Engineering makes a stainless steel pointer that can be used to move the timing process to the top of the pulley. More information about the kit and its installation can be found in this post under the Personalizations posts: https://valvechatter.com/?p=13529

Frustration set in with the engine issues so a diversion was in order. The quick throw shifter kit designed and fabricated by Gerard Chateauvieux (Gerard’s Garage) was installed. The shifter and the installation process are described in this post https://valvechatter.com/?p=13520 which is located in the Personalizations category of the Bugeye site.

Trying to use a timing light to set ignition timing is extremely difficult given that the pointer on the timing cover used for alignment with the notch on the crank pulley is at the bottom of the engine.

Tom Colby at Speedwell Engineering https://www.speedwellengineering.com/ignition-timing-pointer-kit/ makes a stainless steel pointer that can be used to move the timing process to the top of the pulley. This is from the Speedwell website:

A duplicate of the 1968 Works BMC Le Mans timing pointer makes for timing the ignition system much easier by moving it to the top side of the engine. The Polished Stainless Steel Pointer (with a flanged nut installed, eliminating need for washers!) is easily installed by removing a timing cover bolt and installing it in place of the bolt. Once top dead center is achieved, just apply the adhesive backed laser-etched stainless steel timing tape to the crankshaft pulley and you’re ready for precision timing with a timing light. Complete with instruction sheet. 100% Made in the USA

This is a short video showing the installation of the ignition pointer. Installation required draining the coolant and removing the radiator.