I should first note that at this point in time, the content of this post is incomplete. To complete the project I will need the assistance of other Alfa owners, and I expect that the help will be received over time rather than immediately.

Early in my work with my 1987 Quadrifoglio I decided to try to inventory all of the various type and size hose clamps used throughout the car, but primarily in the fuel, emissions and vacuum systems. I have used diagrams taken from the service manual as well as a narrative listing to identify the hose clamps and their location. The numbers added to the diagrams reflect the numbering sequence used in my narrative summary. What I identify in this post is current as of February 17, 2021. 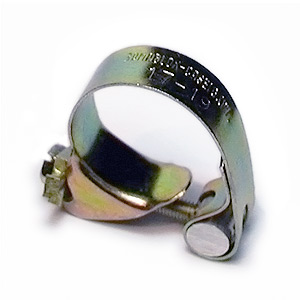 The hose clamps used by Alfa-Romeo were manufactured by Romablok, but they are no longer made. The feature of these clamps that is important to maintain is that they wrap all the way around the hose and tighten 360 degrees. The also have a smoother outside edge with an external screw and a flat solid band so as to not cut into the hose.

I began my effort by visually inspecting the engine bay and then moved to the trunk and then finally under the car. 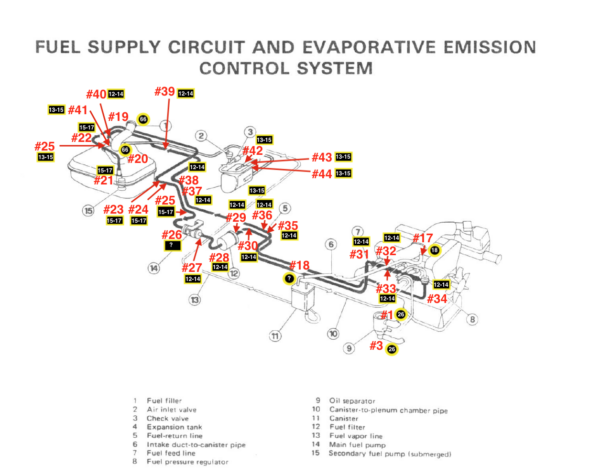 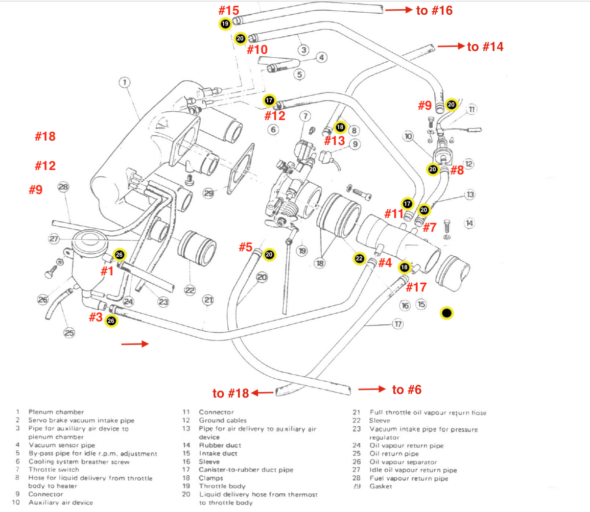 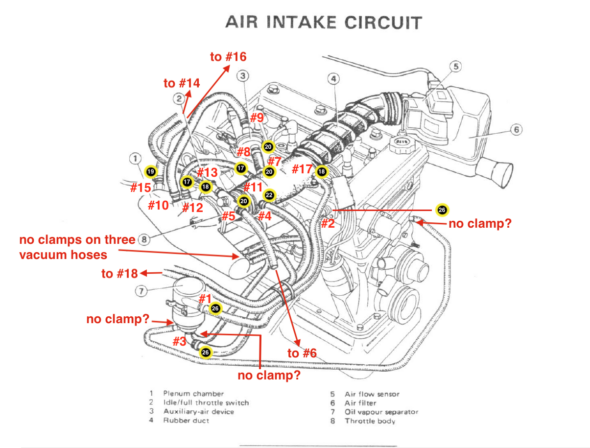 Clamp #41 (13-15)  secures a rubber fuel hose to the evaporative emission outlet pipe at the fuel tank. The hose routes to the rear of the trunk where it connects to the LH lower side of the expansion tank with clamp #42 (13-15).

A rubber emissions hose exits the expansion tank on the LH upper side and is reduced to a smaller diameter rubber hose. The two hoses are connected with two clamps: clamp #43 (13-15) and clamp #44 (13-15).

The smaller diameter hose wraps around the expansion tank and joins a “T” fitting with no clamps. A vent valve is joined at the “T.” The smaller hose then merges with a larger hose with a check valve and then rejoins with a smaller rubber hose and then a still smaller clear hose that seems to exit the trunk behind the LH rear shock absorber. I don’t know where it goes. There is also a fairly large diameter black hose in the same location. I don’t know what it does or where it goes.

Cooling system
I need to finish looking at these.