In the last ten days or so I have tracked some of the low hanging fruit to fix on Alfie, I have continued my cleaning – but this time under the car, and I decided to trace the fuel system and vacuum hoses to inventory the types and sizes of hose clamps used on the car. Most of the original hose clamps are still on the car but a number have been replaced and usually with cheap inappropriate clamps. The clamp inventory project turned out to require a bigger effort and time commitment than I thought. I will make this the subject of a separate category and post at this location: https://valvechatter.com/?cat=2043.

I ordered an upper radiator hose and installed it only to discover that the radiator leak must be from the top of the tank rather than from a perished old hose! This will require some further attention, but it looks like either a radiator repair or replacement is in my future.

The handbrake did not function at all so I undertook a fault finding mission and the restoration of braking. As it turned out, the handbrake mechanism located at the rear of the differential was rusted in place and frozen preventing the operation of the brakes.

This is a photo of the original cable mechanism. As the center cable is pulled (at the top in the image) when the handbrake arm is lifted, the two brackets with the LH and RH cables (in the middle of the swivel arms) are supposed to pivot and pull the drum brake cables tight. However, mine was rusted and frozen in place and consequently did not operate properly. 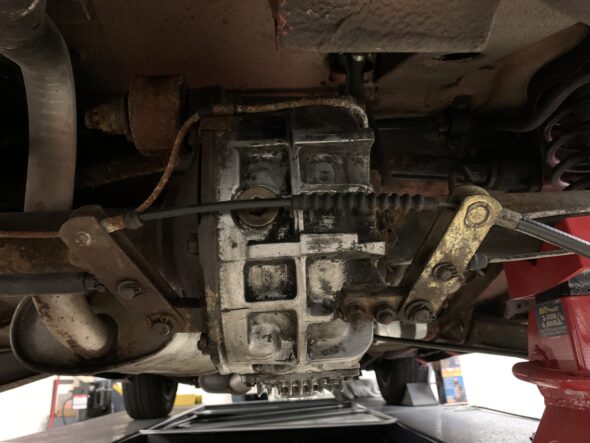 I ordered a new mechanism from Centerline International and installed it on the car. The original part number is 605.17074 with Centerline’s order number being BC420. The item was $59.50. 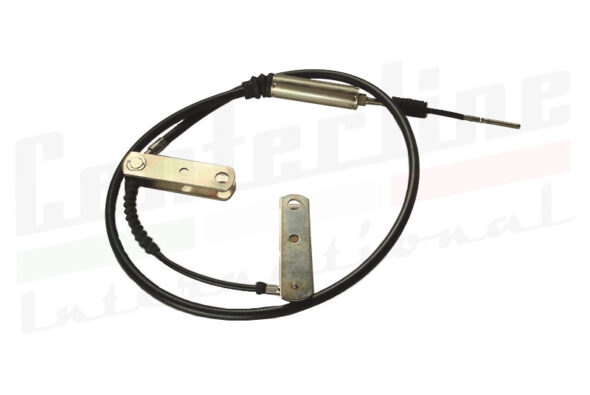 After removing the old assembly, I took the opportunity to clean up the differential a bit more  and I painted the two steel mounting blocks just to prevent them from further rusting. 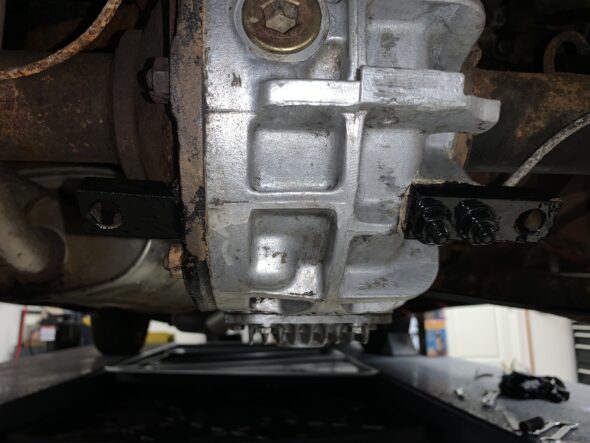 I then installed the new assembly. I applied synthetic grease to the rotating components. Yes, that really nasty looking brake pipe is one of the next few items that will get my attention! 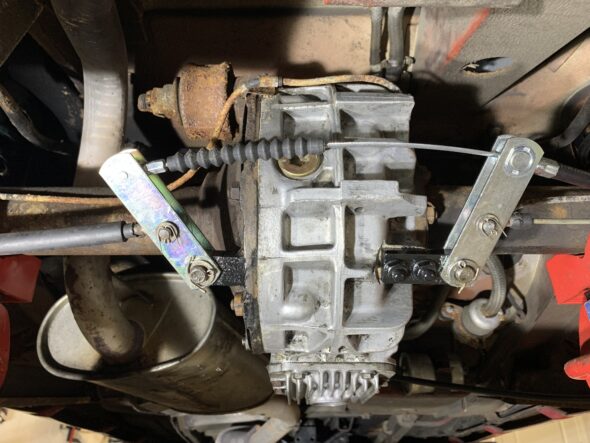 At the other end of the cable I attached a new fork to the handbrake lever with a cleaned-up clevis pin and new split pin. The cable slides through a threaded fixture on the car chassis. It is the red item in the photo below. The cylindrical device is a rotary adjuster that is used to tighten/loosen the slack in the primary center cable. 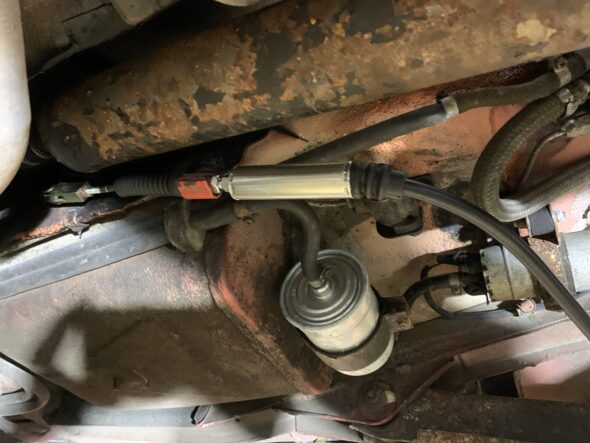 The first step in actually adjusting the handbrake is to place something heavy on the handbrake handle to keep it down (depressed) while making alterations to the system. I then lifted the rear of the car so as to remove both rear wheels/tires. This makes the rear brake rotors accessible. The handbrake works by expanding two small brake shoes inside the drum (rotor). There is a star adjustment wheel inside the drum that expands and contracts the shoes against the drum surface. Using a screwdriver the star adjuster can be moved toward the front of the car (loosen/contract) or toward the rear of the car (tighten/expand).

After removing the disc brake caliper one can loosen and remove two screws and then pull away the rotor/drum – AFTER CONTRACTING THE SHOES. However, in my case it was not necessary to remove the caliper and rotor drum. Because the handbrake is almost exclusively used when the car is stationary, the shoes actually have very little wear. 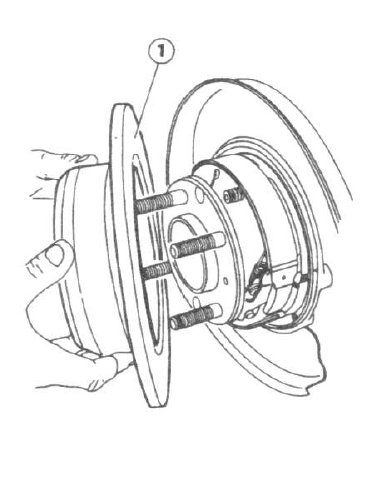 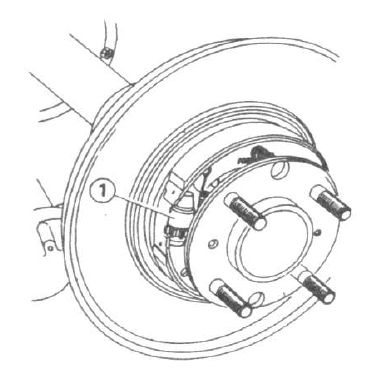 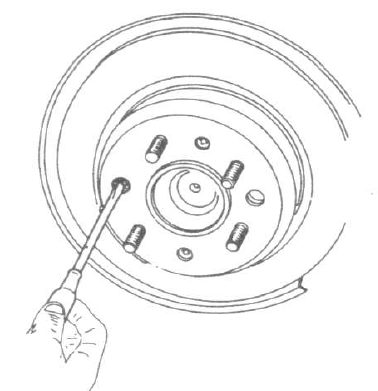 I then turned the adjustment wheel on both the LH and RH wheels to fully tighten the shoes against the drum. I then loosened each adjustment wheel three clicks. This enables the wheels to turn freely or perhaps with just a slight friction or rub. Once this is accomplished, the next step is to turn the cylindrical cable adjuster to tighten (not overly) the center pull cable for the brakes. This process resulted in my handbrake working fully on the third click on the brake pawl.

I then reinstalled both rear wheels/tires and torques the lug nuts to 70 ft. lbs. I then tested the handbrake in the driveway and again after a short test drive and concluded that one more task could be checked off the list!

The rubber door buffer on the RH door was broken and deteriorating. I ordered a replacement from Classic Alfa part number RB061 for $7.10 and installed it by removing two Phillips head screws from a threaded captured plate pin the rear of the door. 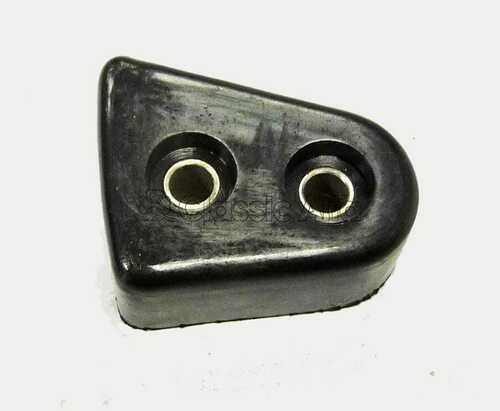 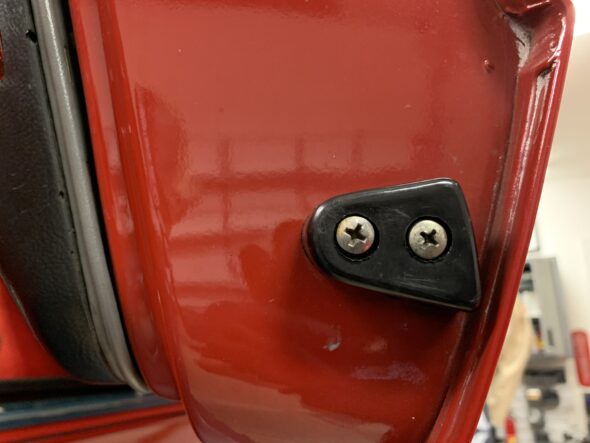 The Alfa has power mirrors on each door. They are controlled by a small switch with a rotational stalk on the center console and each mirror is selected by turning a ring with a selector tab to one side or the other. Alfie was missing the selector ring but I was able to find one (and a spare) from a fellow Alfa owner who frequents the Alfa Bulletin Board. The little ring must be carefully positioned on the switch and then pressed into place. Once installed Alfie’s mirrors both functioned properly! 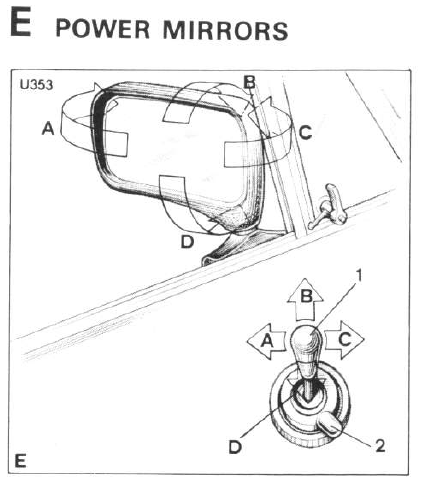 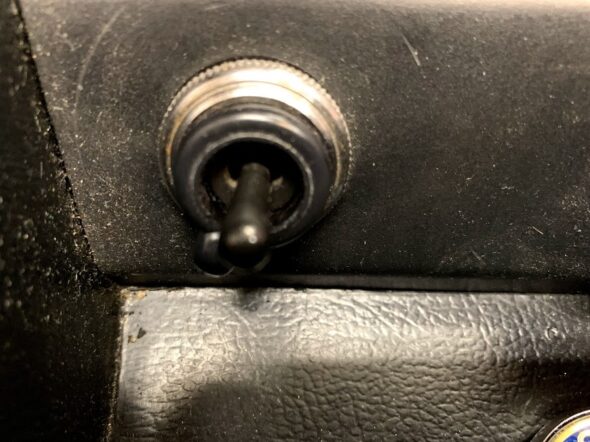 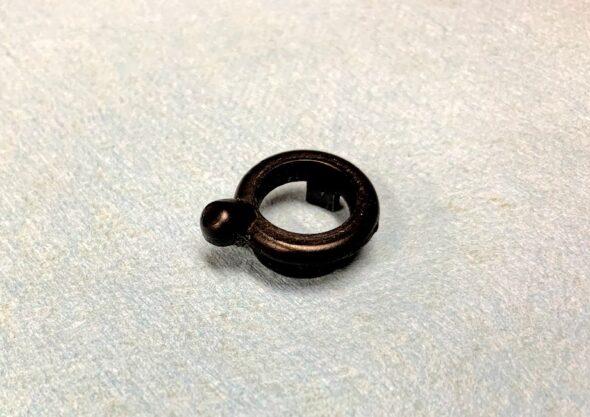 After a longer than expected storage at the Madison Automotive Apprentices Shop in Harrisonburg, VA I finally transported Alfie to our home in Florida. We don’t really have the space for him, but we will make do. I need a project, Alfie needs some work and the time is right!

Passport Transport (Camille) moved the car to Florida. The process took about four days. here is a shot of the car being unloaded in Bradenton. 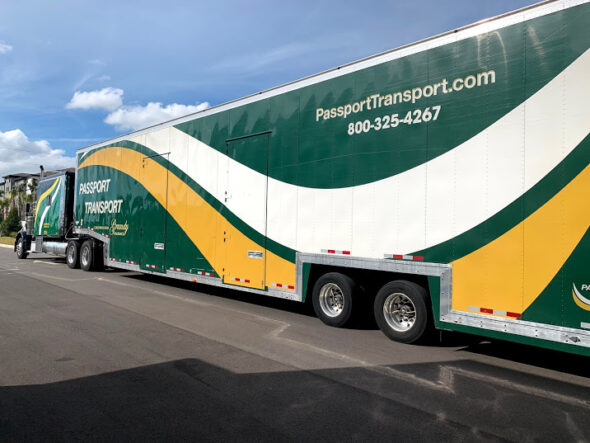 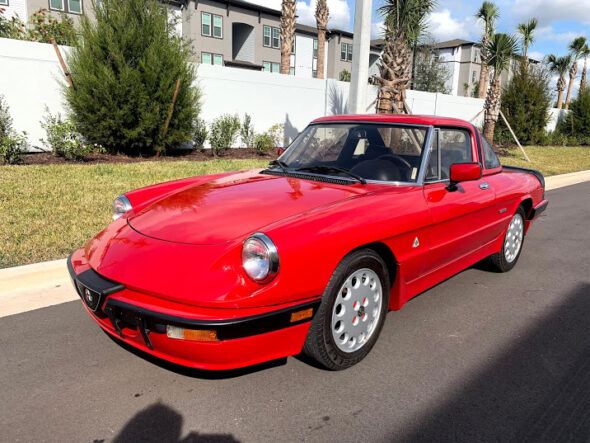 While he looked good in the Florida sunshine, he was actually quite dirty. He started just fine. The brakes felt a little squishy, but I drove Alfie the 2-3 miles home from the delivery point.

The first thing I did was wash, polish (with a buffer) and wax the car just so it had some protection and, of course, he looks a lot better too. I then began a process of inspection and discovery to see what worked properly and what did not. I began with the interior and exterior while the car was on the ground and then followed that with putting it on the garage lift to clean and inspect the underside. I took literally hundreds of photos and made a few videos of the entire car. I can use these to compare my car to others and to answer my own questions about how things were BEFORE I started tearing things apart. My experience with this is that you can never have enough photos. More is always better. 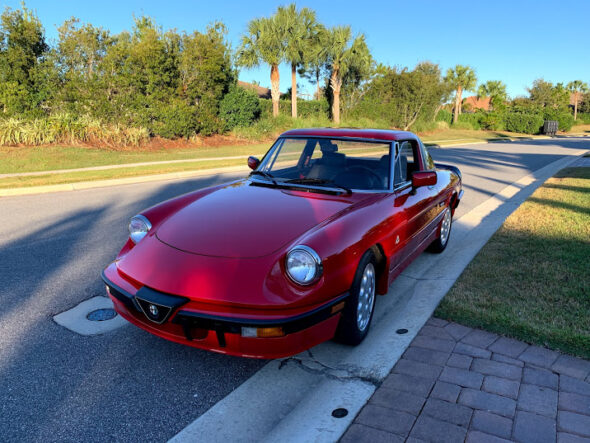 After Wash and Wax

I was pleased, and surprised to find that most things electrical worked as they should. A few needed some cleaning and coaxing such as the courtesy lamps. I have spent a lot of time on the Alfa Romeo Bulletin Board and learned a great deal. One of the contributors suggested that I should snap the door jamb switches a few times and spray them with some electronics contact cleaner. I did just that, and like magic the courtesy lights are now working!

I am sure that I will discover many other items that need attention but this is my first list of things that need to be addressed. Should be fun!

I am sure that I have only touched the surface of issues with Alfie, but it is a start and gives me a list of parts I need to order and install or repair.

I am experiencing some starting problems that seem to be due to a partial discharge of the battery after the car has been sitting. Not knowing the car and what others may have changed/updated/disconnected or connected, I thought I would begin by replacing components in the ignition system including the distributor cap, ignition wires, rotor and coil. I ordered these components from Centerline International.https://www.centerlinealfa.com/store 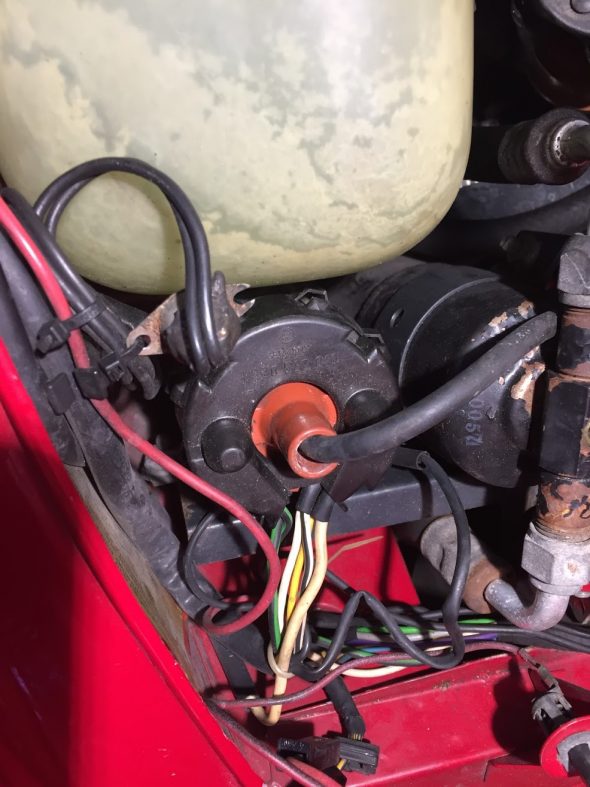 Old Coil to be Replaced 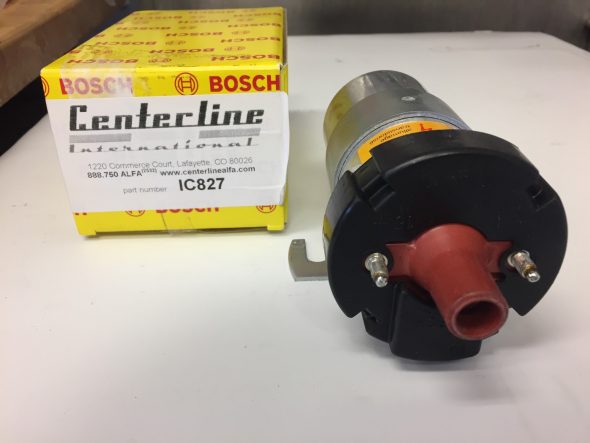 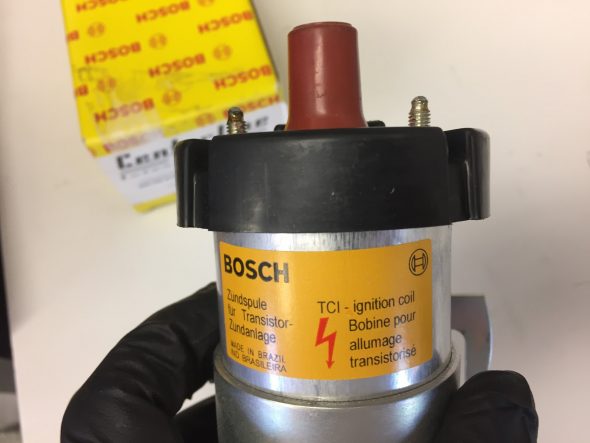 I began the task by removing the old coil. There are a total of six wires connected to the coil terminals. The (-) terminal has four wires secured to the mounting post with an 8mm nut: a larger cream-colored wire, a white wire with a black tracer, a yellow wire, and a white wire. The (+) terminal has two wires and both of them are light green with black tracers. 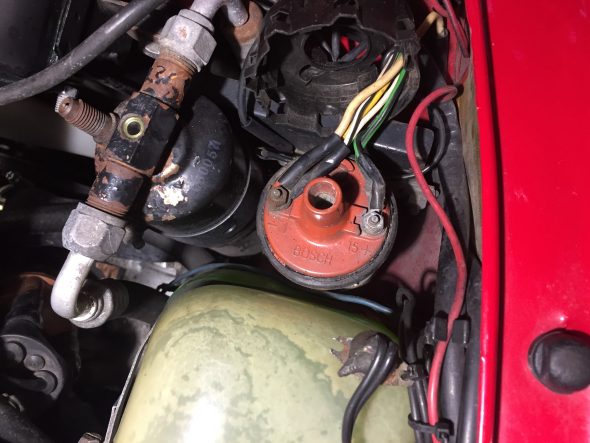 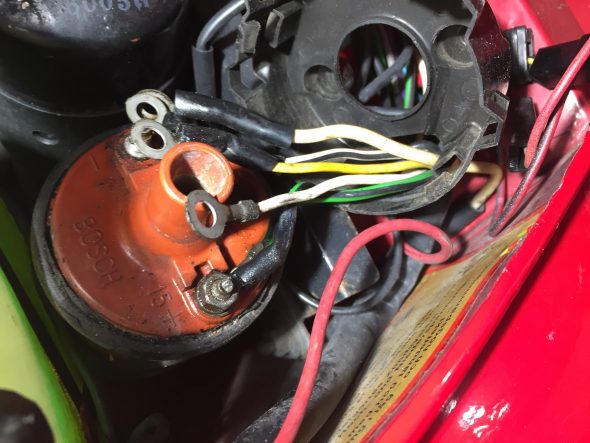 To access the mounting bracket nuts for the coil, I found it easier to first remove the coolant recovery tank. This was accomplished by loosening the screw in the bracket connection and then lifting the tank temporarily out of the way. 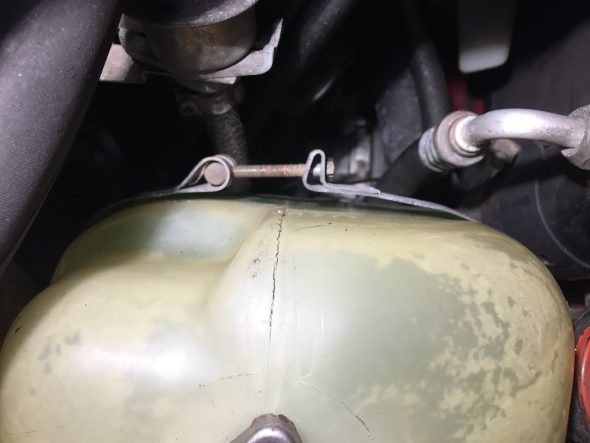 I was then able to remove the old coil and install the new one: 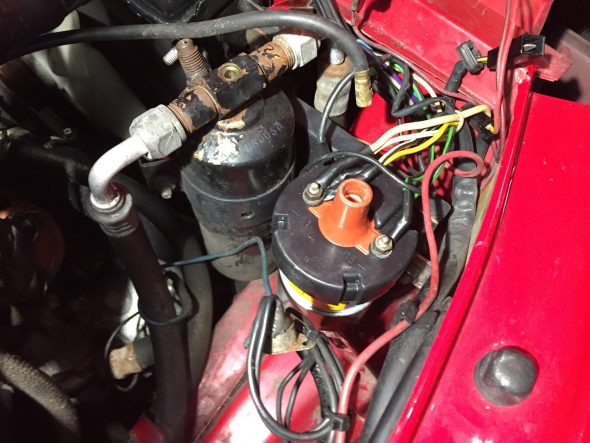 I then carefully marked each ignition wire with a number to designate its location for replacement, and after also marking the old distributor cap for location purposes, I snapped the top off of the black plastic loom to free the wires. 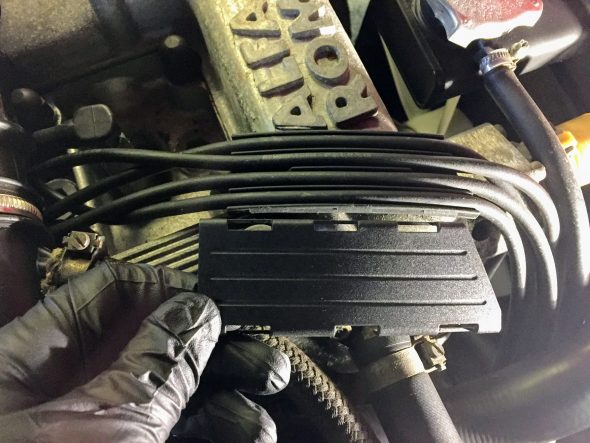 I then disconnected each wire at the spark plugs and popped free the two securing clips on the distributor cap. I could then lift away the old cap and wiring. I had previously disconnected the coil wire while replacing the coil.

The new wiring came with numbers on each wire. After properly locating the wires in the appropriate place on the new distributor cap, I pushed the wires into their seats. This is a tight fit and they were somewhat difficult to fully seat. The coil wire included a rubber cap to press fit over the top of the coil. 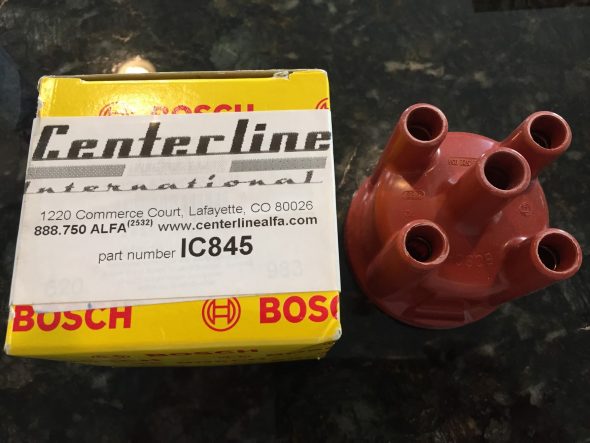 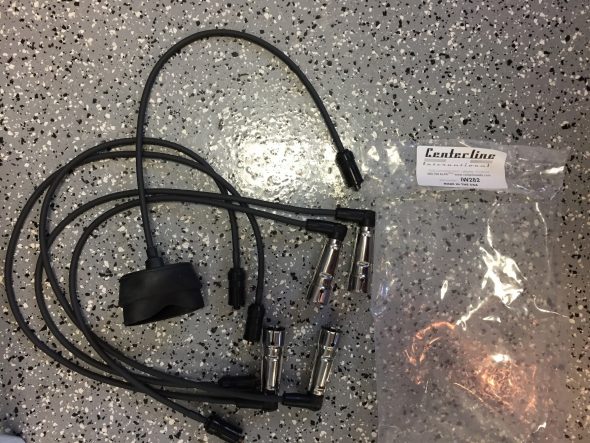 I then removed the old rotor and installed a new Bosch rotor on the distributor shaft. 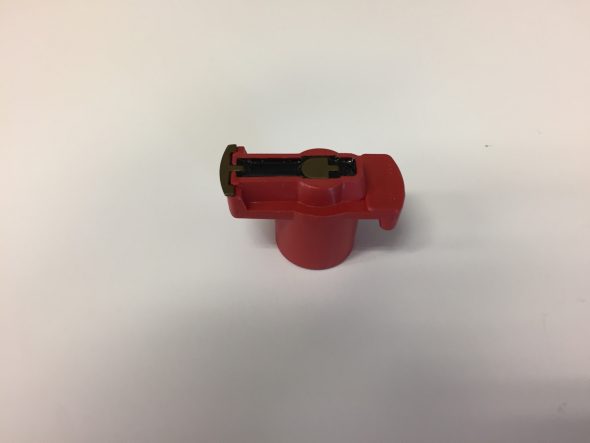 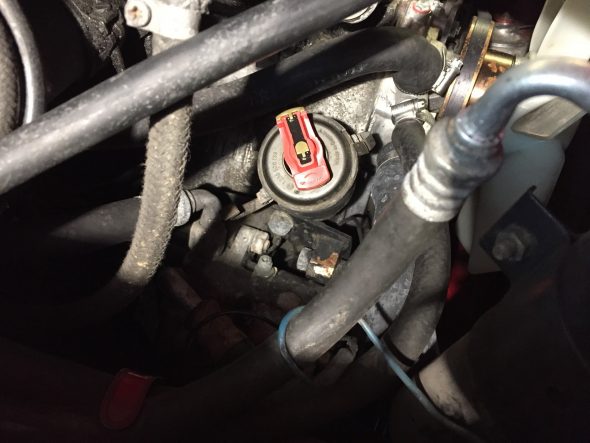 The new distributor cap and ignition wiring assembly was then reinstalled to the distributor and to each of the spark plugs and to the coil. The coolant recovery bracket was replaced, the coolant tank was restored to its mounted position and the bracket was screwed back together.

The task was then  completed with a successful test drive.

However, I discovered the next morning that the battery discharge issue remains and I will now begin my sleuthing to try to discover the source of the problem.

My battery bracket/clamp was pretty rusty and partially consumed by battery acid. I could have replaced it with a universal clamp for considerably less expense, but I chose to purchase and install the proper clamp set from Alfaholics in the UK. https://www.alfaholics.com/parts/105-series/electrical/battery-clamp-set/

This is an image of the battery clamp set as it was received:

I just did not have the space at our home to keep Alfie and not having the time to work on him, I decided to relocate Alfie to a friend’s shop. After some sleuthing about, it was discovered that the start-up injector in the fuel injection system was not functioning properly and it was replaced. This solved the start-up mystery and the car now starts without any hesitation!